Somebody Up There Likes Bob Byington

The writer-director talks about his fifth feature 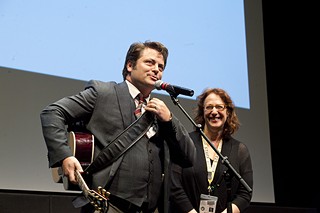 If the release of Somebody Up There Likes Me represents a moment of reckoning in the career of Bob Byington, it appears that he is well-positioned to seize it. Despite an uneven response from critics, the Austin writer-director's fifth feature made its theatrical debut in Chicago to a resounding one from audiences, grossing the second-highest opening weekend in the past six years at the Music Box Theatre.

For most independent filmmakers, this development – a reversal of fortunes for a class of artists who on some days must wish they could sustain their work on the word counts of alternative weekly and Indiewire writers – would be a welcome one. For Byington, it's just another day at the office.

A polarizing talent whose sense of humor is so inimitable as to draw suspicion, and whose powers of observation rival those of the Sonys he shoots on, Byington is a filmmaker whom viewers – critics and audiences alike – can meet on their own terms. He imposes no expectations on how you receive his work, as long as you impose none on the work itself. In conversation, he discusses accolades and hatchet jobs with the same casual detachment.

Fair enough. For Byington, who as a writer turns his back on those beats writhing between awkward and uncomfortable stretches in dialogue like they're street urchins with open sores, Somebody Up There Likes Me is a departure. It's borderline Capraesque in its openness and generosity.

The film follows Max (Keith Poulson), Lila (Jess Weixler), and Sal (Nick Offerman) over three decades of romance, betrayal, success, failure, happiness, and pain. Since a series of mundane scenes comprise the story, by the time one realizes that irrevocable shifts have taken place, it's almost too late to appreciate.

"I love the cautionary-tale quality in the notion that we Americans have a perennial teenager within us, of whom we must be wary," says Somebody co-lead and producer, and Parks and Recreation star Nick Offerman. "Lest we let our lives slip by while staring at the babysitter's tits."

After several fits and starts, the Chronicle spoke with Byington by phone in early March.

Austin Chronicle: I want to thank you for calling me back. I almost felt like it was going to be one of those situations where you send the waiter away because you're not ready to order, and then they never come back. You didn't do that, so thank you.

Bob Byington: You're welcome. I wouldn't think of it. I notice when I read your stuff that you're one of those journalists who, I don't know, do your stories in a way that interests me. You're a throwback to a bygone era. Happy to be a part of it.

AC: Thank you. Getting back to waiters, what made you want to set your new film in a restaurant, with characters who are waiters?

BB: I was in Sullivan's Steakhouse Downtown one day, and I saw two waiters leaning against an area where the food was coming out ...

BB: No. The area between the kitchen and the dining room, where they put the plates. I don't know what that's called. For some reason, I imagined my two main characters in this story, one of them talking to the other one about the passage of time in that particular space. And, so, we actually tried to get Sullivan's to let us use their restaurant, because I wanted to try to shoot there, but we ended up at Perry's Steakhouse, which has a pretty similar vibe.

AC: How would you describe that vibe?

BB: Old-school steak house, where the customers are coming in for a certain experience. They want to see the waiters in ties, and they expect to get a good steak for their $50. They want a good steak. There were a bunch of other restaurant options that we could have pursued, but I knew what I wanted as far as where they worked. One of those places where you might work for 30 years. Where you could make a decent living, and where you'll see a 30-year-old waiter next to a 50-year-old waiter. We could make the whole interview about my opinions about types of steak houses.

AC: Can you compare and contrast the experience of this production versus recent ones of yours, like RSO [Registered Sex Offender] and Harmony and Me?

BB: I can. RSO, as you know, was shot over a very long period of time, nearly two years. It was a lot more like a documentary than a fiction feature shoot. And then, when we finished, we jumped right into the Harmony shoot, which was an 18-day shoot. On this job, we had a lot more planning time, and we had a very experienced producer scheduling the film, and we had more money and a bigger cast. On RSO, we were just kind of figuring things out as we went, and then we sort of applied what we figured out to Harmony, and then we reapplied that with Somebody.

AC: I have this image of you as potentially chafing under the setup you describe. I see you not responding well to a tighter schedule and a larger cast.

BB: A little bit of chafing, no question. Working with schedules for actors, there are things that one chafes about. The more in-demand your talent, the more you're going to put yourself in situations where you're trying to find a time frame when everyone can work. And you have to be flexible. You may have your dream; you may think, "Oh, I can't make this movie unless Nick Offerman is in it," and I think if you get locked into that kind of thinking, you might be digging a hole for yourself that you can't get out of.

AC: Did you find yourself at any point feeling like you had to cede control to higher powers other than yourself, that you were swept up into the maw of this new system?

BB: Yeah, I think that happened once or twice. That's where it's great to have a producer who is very reassuring to work with. For us, it was Hans Graffunder. He had worked with Terrence Malick, who likes things loose. Hans had also worked on The Sopranos, where the stakes were a lot higher than they're ever going to be on one of our jobs. And it just felt like anything that got thrown at us, he would take care of me and the job. Some scheduling stuff happened to us that wasn't the greatest, but he was able to solve that stuff without much fuss.

AC: You were talking about your actors a minute ago, and so often you refer to your productions using "we," "us," and "our." One thing I admire about you is your loyalty to certain actors, that you go to them again and again. But is that out of an appreciation of their capabilities or laziness on your part?

BB: It's neither, actually. It's an inclination, I think, when you're writing something. You'll gravitate toward certain people. Usually, it's people who you've worked with who are going to pop into your head as characters. In the case of half a dozen of the characters in the new film and the film before it, they were people who I was writing for naturally. Not because I think that they're particularly great, and not because I'm resistant to other talent, but simply because that's often how one ends up working.

AC: Talk to me about Keith Poulson, who has played supporting characters in your earlier films. Why was he right for the role of Max? I think at the very least, you could say he shares some traits with your previous protagonists.

BB: Well, it sounds like you could say that, and lead the witness to agree or else make the interview contentious.

AC: I've set out to make this interview as contentious possible.

BB: Keith is a guy who we met on RSO. He came in to do literally a 20-second bit where he was just going to talk about knowing the main character, and that evolved into him becoming the guy's brother and being in close to a third of the movie. We really liked him, and he had this great presence on screen. A similar thing happened on Harmony. We really hadn't planned to use Keith, but he so fit into the world that we were working with, and we had a last-minute actor replacement for the mother character, and we just found that we needed Keith in the family to play the main character's brother again to kind of fill things out.

And, then, when I toured with Harmony, at a dozen film festivals, people would say: "Hey, you know I liked your movie. What's up with the guy who plays the kid brother? He's amazing!" I'm not kidding. I heard that again and again and again, and it got to the point where it made sense to write the new movie for Keith and for Nick. For them to be buds.

AC: What is that noise? Are you typing on a keyboard over there while we do this interview?

BB: No, I'm outside. There are birds outside. What do you mean, did I get a bird? I have cats here. I'm not going to get a pet bird.

Bob Byington, Somebody Up There Likes Me, Harmony and Me, Nick Offerman, Hans Graffunder, RSO, comedy, cynicism, director