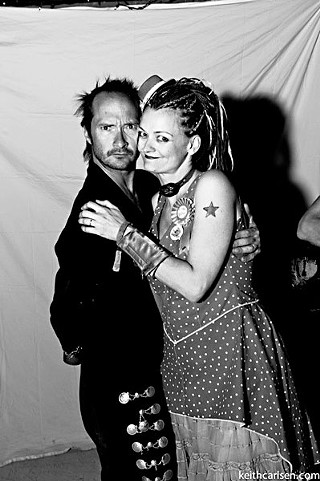 Devolver Digital has its plate full. The video game publisher and production company dropped the surreal and hyperviolent Hotline Miami on the unsuspecting public in 2012, and it was on many best game lists by year's end. With Dungeon Hearts hitting mobile devices and PCs on March 28 and the much ballyhooed upcoming dogfighting title, Luftrausers, coming out this season, you have a very full company. Right?

Nope, it's going back for seconds.

On March 7, Devolver dispatched a press release saying it would be on the hunt during the South by Southwest Film Festival for movies fit for release later this year. The notice served as the formal announcement of Devolver Digital Films, complete with its two head honchos: co-founder Mike Wilson, expanding his role from the gaming arm of the venture to include film, and Andie Grace as vice president of acquisitions. Wilson's legendary if slightly checkered past with video game development (see "Betting the Farm," Dec. 14, 2007, for more on that) might not seem like a résumé worthy of a film distribution gig, but he's also worked producing a DVD video-magazine back in 2001 (i.e., before YouTube made that a thing), and helped produce two feature films. Wilson worked with Grace (aka Actiongrl) on Burning Man: Beyond Black Rock, a documentary about the desert festival where she was an executive staff member for 13 years. Who even knew Burning Man had an executive staff? All we know is if she can herd those counterculture cats, she can probably do just about anything.

Apart from using Tugg for a few cinematic screenings, Wilson doesn't want to engage with the established world of big-screen releases, opting to focus on video-on-demand and other digital modes of dissemination. When releasing a film digitally, directors and producers are left to promote their own work. Wilson explains, "The fact is that the filmmaker's resources, network, and energy are very nearly, if not completely, exhausted by the time their film reaches the market." Enter Devolver, whose connections with the digital distribution of video games makes them well-suited to market to the expanding demographic of the "gamer," which pretty much includes anyone with a phone these days.

Another result of the ongoing digital revolution is a new generation growing up without cable television, satisified to stream their moving images on their computers, gaming consoles, and Apple TVs. Devolver looks for movies that have performed well on cable and will bring them to emerging markets that demand entertainment on their own terms: at home and when they're good and ready to watch something.

The new company smell hasn't even dissipated, so Devolver doesn't have any films on its roster yet, but it's eager for spunky little projects to support, and looks forward to announcing its first few releases in the coming months. "Our model on the games and the film side is the same," Wilson says. "Super light, almost no overhead, and willing to scrap and champion films in ways that the bigger companies honestly can't be bothered with." In other words, Devolver is hungry for more.