So 'Wrong,' but So Right 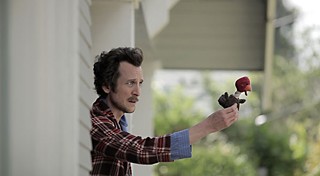 If you think that Quentin Dupieux's new movie, Wrong, is about a guy who loses his pet, you'd be right. But it's more than a shaggy dog story. It's about company logos, changing trees, canine telepathy, and, ultimately, people who don't really understand each other. Dupieux says: "If you say it's a film about a guy looking for his dog, it sounds really bad and cheesy. I'm trying to mix everything, but it has to be in a coherent world. That's the trick."

Wrong is part story, part puzzle box, and Dupieux revels in asides, digressions, and hidden games. He says: "If you just talk about the plots, my movies sound stupid. But I think my scripts are cool to read and funny. Even if the vibe of the movie was not in the script, you could get a real idea of it." Wrong's winding path to reuniting master and pet starts when dog-deprived office drone Dolph (Jack Plotnick) tries to distract himself from his loss with a phone conversation about a pizza delivery flier. Dupieux calls that scene "the tuning fork" for the film. "I'm just trying to find some secret places," he says, and the dog is the MacGuffin to take him there. "I'm not really interested in the red line. This dog story, I don't care about it. It's just something you need to make the movie solid and that connects everything together."

Dupieux admits that he had the same problem with 2010's Rubber: that any synopsis misses what the film is really about. His breakthrough English-language success was nominally about a killer tire roaming the Midwest. That was the original image, Dupieux says, but "after writing 20 pages of tire action, I knew I needed something else." So Rubber is a movie about a movie within a movie, but one with an inanimate lead actor. Dupieux says, "I got bored with the tire, because you had to think for him." After that experience, he says, "I wanted to make a movie that didn't look at itself. ... With Wrong, I wanted to make something with the same vibe, the same spirit, but in the real world, in a way."

Much of Wrong's mood comes from juxtaposing Dupieux's lush, dreamlike images with his self-composed and spartan soundtrack, like the overly menacing piano chords as Dolph roams his house. It's no surprise music is pivotal, since Dupieux first achieved international fame DJ'ing as Mr. Oizo (watch for a quick, dog-slobber-laden cameo from Flat Eric, the puppet star of his "Flat Beat" commercials for Levi's). He says: "When I'm shooting, I have some kind of music in my mind. When I'm editing and try to reproduce what I had in mind, it's impossible. First, because I forgot it, and also because the music I have in my mind is better than what I can do."

His DJ career explains why Dupieux set the movie in a fictionalized America, glimpsed by an outsider's lens. One of his earlier efforts, 2007's French-language Steak, was rarely seen outside of his native France. "I got really frustrated that, after the French release, the movie was done. I was used to selling records worldwide and having some fans in Japan or wherever, so I think with Greg [Bernard], the producer, we decided to give my movies a chance. I think we were right, because when we showed Rubber in Cannes, a lot of countries bought it because it was in English."

For him, Wrong is "a very pleasant nightmare," and he's not prepared to wake up yet. He is putting the finishing touches to Wrong Cops, following the misadventures of Wrong's needlessly surly Officer Duke (Mark Burnham). While Dupieux denies it is a sequel, the same puzzles and digressions inevitably await. Dupieux says, "When you try to take the audience in some secret places, you have to break the codes."