Grief as a 'state of suspension' 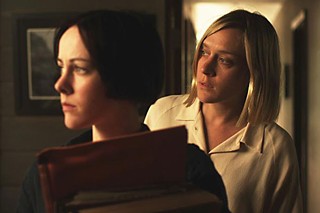 
After Sunday's premiere of The Wait, director M. Blash explained that in making the film, he was interested in the idea of grief as a "state of suspension." Sisters Angela (Malone) and Emma (Sevigny) are well aloft in this state at the film's outset, upon the death of their mother. She passes quietly in their family home, tucked away in a wooded, planned community that itself becomes a central character, with its distinct feel of alpine retreat crossed with country club. Against this surreal – and stunningly shot – backdrop of isolation and immersion, beauty and loss, the ensuing days unfold slowly as the family succumbs to Emma's fantasy that her mother can be revived. Blash mixes the literal and metaphorical like an unapologetic metallurgist, at times achieving heights of artistic ecstasy that sear disparate sequences into the mind like untethered fever dreams. This film is not comfortable for the viewer with a low tolerance for ambiguity or the desire for guidance on what to feel. And of course, neither is grief.