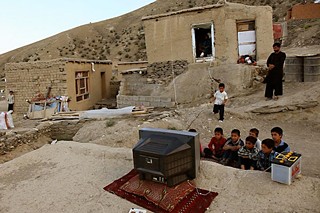 
What could be better than a doc about Afghanistan with nary a suicide bomb, a subjugated woman in a burqa, or a waterboarding event? The Network is a terrific, eye-opening, and heartwarming look at the first independent television station in Kabul, Tolo TV. Begun as a radio station, Tolo today employs more than 800 people. Shown the ropes by a group of Australians and Afghani expats, Afghans are learning how to produce programming – news, cooking and travel shows, dramas, and, yes, even Sesame Street – for a population where people often gather around an old-school set powered by a car battery. (It turns out that many Afghani adults – at least 60% of whom are illiterate, according to the film – are learning to read by watching Sesame Street. A two-fer.) In the end, the question remains how long Tolo will remain afloat when all the foreigners leave.