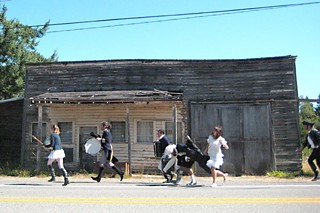 
Portrait of the artist as a working American. With her feature debut, Seattle choreographer Dayna Hanson fashions a dramatic account of making her 2010 dance-theatre work, Gloria's Cause (seen locally at last year's Fusebox Festival). While her co-creators play fictionalized versions of themselves and some events are invented, there's truth in Hanson's depiction of the work that occurs outside the spotlight – rehearsals in dreary government buildings, endless calls to book gigs, extra jobs to stay afloat ­– particularly for those artists in the U.S. today far from the country's cultural centers. As this troupe develops its piece about the American Revolution, revealing the humanity of its leaders and exposing the realities behind its principles, parallels emerge, with Hanson a George Washington, vulnerable and criticized, fighting to lead eight artists as fractious as the 13 colonies. Art, like America, might be an experiment "designed to fail," but Hanson engagingly shows that when artists unite for a common good, something glorious emerges.