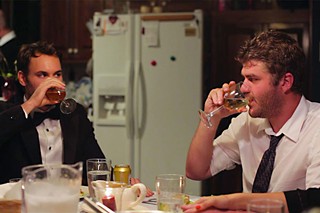 
When a movie opens with the death of a father and still manages to get laughs, something is either going very right or very wrong. In the case of Awful Nice, it's both. The hijinks the two brothers get into by mistake or by design are, almost without fail, wrong. That wrongness includes run-ins with Russian thugs, prostitutes, varmints, the police, and enough flying fists to fill an action flick (if the leads were drunk the whole time). If it sounds like another Hangover sequel, then you're not far off, but Jim (Pumphrey) and Dave (Rennie) muster the humor of three actors easily. Dave sometimes resembles Charlie from It's Always Sunny in Philadelphia a bit too closely, but it's hard to fault him when the laughs come this fast and furious. And that's what's right – well, that, and great side performances from Meloni and Yakov Smirnoff, of all people.