'The East' director Zal Batmanglij dishes on life as an anarchist 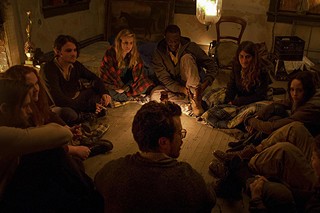 The East, the closing night film at SXSW, is very much in the cultural zeitgeist. It's a slick-looking, Hollywood-style thriller that stars Alexander Skarsgård and Ellen Page, but it's also about the sort of anarchist collectives that helped inspire movements like Occupy Wall Street and Anonymous. Director/co-writer Zal Batmanglij and star/co-writer Brit Marling spent months living the anarchist lifestyle before returning to filmmaking with The East, and the movie benefits from that authenticity. We caught up with Batmanglij to learn what his time in anarchist collectives was like and just how slick a dude Alexander Skarsgård is.

Austin Chronicle: The East feels like it could have been a Fight Club or V for Vendetta-style rallying cry for disaffected anarchists, but it doesn't have the sort of heroes that those films do. Was that intentional?

Zal Batmanglij: I mean, we decided to go in on the side of the infiltrator, so inherently, our heroine is not an anti-establishment hero. I side with the anarchist instinctively, but I don't think it's very realistic – if we were 100 percent going to side with the anarchists, then we'd go be anarchists, right? Something about us still likes air conditioning and ordering shit on the Internet and all this stuff that modern life affords us. And yet something feels very wrong with that. And I think that's something Brit and I were very interested in exploring. ... There's something very wrong with all of this, but none of us want to give it up entirely. So is there a middle ground?

AC: Have you given any thought to the reaction you're going to get from the Anonymous/Occupy types after they see the movie?

ZB: In some ways, it's what I'm most interested in, but in other ways, they're going to be doing their thing no matter what, so it's also the least important. I was so happy when both Anonymous' and Earth First!'s Twitter feed retweeted our trailer. That's a good first step. Let's see what they think of the movie. I mean, our movie is fictitious – I don't think most anarchists are eating soup in straitjackets – but I think the ideas are wholly anarchistic: ... Who's going to be accountable for all this stuff?

AC: It seems like the sort of movie that might inspire people, but it also doesn't play like wish fulfillment because your characters are hard to identify with. Alexander Skarsgård has a little bit of Manson to him.

ZB: When you see anarchists on TV, they do seem Other, at first. There's a part of me that would have loved to have made the movie version in which [Skarsgård's character] is the new Brad Pitt, but that's so easy. It's not fair. You promise this to an audience, and then the reality when you go join an anarchist collective is that it is filled with weird people, and that's OK. Anarchists are weird. If they weren't weird, they wouldn't be anarchists; they'd be bankers.

AC: You lived with anarchists for a summer in order to understand them. Can you tell me a little about that experience?

ZB: We didn't go to understand it in terms of writing a movie; we went to understand it in terms of living life. I was naturally drawn to that stuff, so I wanted to understand it better as a human being. When we went, it felt so Other. And then it slowly becomes your reality, and you're just so blown away by it. You're so impressed that people are living by their principles, and there's a whole different way to construct reality. It's kind of mind-blowing once you experience that. We didn't watch any movies that summer or listen to any recorded music or have a computer. Maybe I should go back.

AC: In many ways, the movie is a Hollywood-style story with movie stars in it. Did that help you ground it in reality?

ZB: Everything in the movie is very real. The drugs that this stuff is based on – it's all true. The fact that it passes the Bechdel Test? Show me some other Hollywood thrillers that do that. There are a lot of things that are very subversive that this movie is trafficking in. The package is very glossy – Alexander Skarsgård is a glossy guy. It looks good, the music is heart-thumping music, and all of those choices were purposeful because there are a lot of other things it's doing. I like smart Hollywood movies. And Hollywood does, too. Michael Clayton is a favorite movie of mine. Fight Club is a great movie. Those movies are great movies. We are at a place now technologically where you can have those – the budget for this movie is so small. It's one-third the budget of Silver Linings Playbook. And yet you can make things look slick. That's a new thing.