Peek behind the curtain of the White House 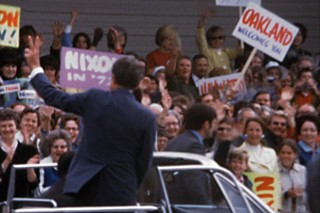 
A real crowd-pleaser, this, with something for anyone harboring a still-smoldering fascination with our Nixon and his Watergate saga. For those too young to have experienced the scandal as it unfolded in the media, it's reprised here, using archival footage – culled both from now-familiar network newscasts and the Super-8 "home movies" shot by Nixon aides Haldeman, Ehrlichman, and Chapin. The latter were seized during the Watergate investigation and were recently noticed sitting on the shelves of the National Archive. With a few exceptions, however, their contents are fairly predictable and don't really add much to a very familiar story, unlike the clips from the infamous audio tapes – yes, those tapes – that accompany the Super-8 footage in the film. Doesn't get much better than hearing Nixon gripe to an aide about the women that his then-swinging-single Secretary of State Henry Kissinger was bringing to state functions.