How living together strengthened the ensemble in Sean Gallagher's debut feature 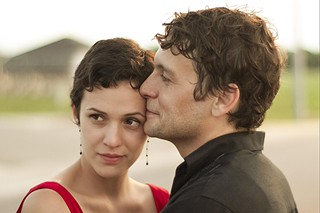 The night before director Sean Gallagher began shooting his debut feature, Good Night, he learned what it means to helm an ensemble film that features three actors – Alex Karpovsky, Todd Berger, and Jonny Mars – who are all also accomplished directors in their own right. The bulk of the cast was living together in the film's set, a two-story house just outside of Austin in Manor, and the close quarters facilitated some impromptu meetings.

"Everyone was supposed to go to bed to get up early the next day to shoot," Gallagher recalls. "I was up at the table working on some last-minute details with Jonny [who also produced], and at about 2 o'clock in the morning, Todd and Alex came down in their pajamas. They had this huge idea about how to restructure something, and for about an hour and a half, we stayed up in the middle of the night. They explained where they were coming from, I explained where I was coming from, and we kind of left it at that."

When it came time to film the scene in question, Gallagher acknowledged that the cast members had a good idea, and he made the change. Gallagher says that the film – which stars Austin locals Adriene Mishler and Jonny Mars as Leigh and Winston Rockwall, a couple who throws a dinner party to both celebrate Leigh's birthday and reveal to their friends that she's facing a terminal disease – benefited from the input of his well-credentialed colleagues.

For Gallagher, one key to being an effective director and building an effective ensemble involves checking ego at the start. "You definitely want to make sure that you have the level of control that makes you feel comfortable. But you are the director – you're not the controller," Gallagher laughs. "I keep waiting for someone to do 'controlled by' – I have friends who I think would like to make a 'controlled by' film."

If relinquishing that control is one part of building the ensemble, the other involves making sure everyone knows each other really well – something that was accomplished by the 10 days that most of the 11-person cast spent living in the four-bedroom house in which the film was shot. In addition to the chemistry that he expected the cast to develop simply through that proximity, Gallagher also created a series of activities and games for them to participate in together, which he dubbed "set school."

"Once they got what we were doing, they all just went to town with it," Gallagher says. "Once they realized, 'We're all just going to hang out in this sandbox for two weeks,' you can kind of go where you want. I tried to have a conversation with each of them where I said: 'You own the character now. I don't want it anymore. I have to make this movie, so I'm giving it to you. Just be careful with what you do, and make the choices you want to make.'"