Do or Do Not

"You can do what you can do," young Allan Kournikova tells the camera, blond hair flowing over his sky-blue eyes, as the chubby-faced 7-year-old competes in the World Championships of Junior Golf. Mark his Buddha-like words as the mantra of multiple sports documentaries featured during the South by Southwest Film Festival that all follow a form of American mythologist Joseph Campbell's so-called "hero's journey": They are called to adventure; cross the threshold into a new world; face tests, allies, and enemies; and return home changed.

It's at the heart of SXSW sports docs that range from sailing to small-town basketball. Kournikova – yes, he's retired tennis star Anna Kournikova's much younger brother – is one of eight huggable stars of The Short Game, including the female Tiger Woods (she calls herself the Tigress), the shy kid, and the pink-clad girlie-girl Texan. "From the beginning of the development of this project, I thought of the kids as David and the game of golf and the difficult golf course in Pinehurst as our Goliath," says filmmaker Josh Greenbaum. "More so than competing against each other, they are all competing against the course, against old man par."

On some level, you want to hate these precocious overachievers, or feel sorry for them, and surely to find fault in their "stage" parents. "I learned, just like every parent is different, every child is different," Greenbaum says. "Take Allan and Alexa [the Texan]. Just like Jack Nicklaus says in the film about himself, they too thrive on that pressure. They actually enjoy it."

That personal journey is also at the heart of the docs Maidentrip, which follows 14-year-old Laura Dekker on her almost two-year sailing trip around the world, and The Other Shore, about then 62-year-old Diana Nyad's attempt to finally complete a treacherous solo swim from Cuba to Florida that she first tried in 1978. 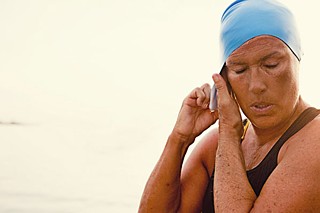 Dekker is from Holland, where the government tried and failed to stop her journey – a journey that seems predestined for a girl born during her parents' seven-year-long ocean journey. The uncertainty of the sea and the wind defines the levelheaded teen, who transforms from girl to young woman before our eyes. Director Jillian Schlesinger gave Dekker cameras and some basic interview questions and met Dekker at a few stops along the way. "I wanted to collaborate with her, to provide a platform for her strong voice to be heard so that people could understand and relate to her unique story of determination and courage, and her voyage to find her place in the world," Schlesinger says. "It's inspiring to other young women with bold dreams – that girls can be tough and gritty and badass and do things like conquer the world alone in a boat."

Nyad's story, on the other hand, is more troubling, as it raises the question of whether life is the journey or the destination. The doc shows the competitor-turned-famed-sports commentator to be stunted. She has not been in a relationship in 20 years, her mother has recently died, she hasn't been swimming in 21 years, and sports doctors say this journey is now physically impossible. The doc reveals Nyad's claim of long-term sexual abuse by a coach when she was a teen and a strained relationship with a stepfather she portrays as a professional hustler, but avoids any deep discussion of her openly lesbian adult life.

"It's what keeps me going – the real vision of the other shore," Nyad says in the film, which was directed by her nephew Tim Wheeler, who is too young to remember his aunt's previous exploits in distance swimming. The doc follows Nyad through her training and preparation before thrusting the audience into the open water, teeming with sharks and jellyfish. It is the tears of her best friend, fellow sports competitor Bonnie Stoll, that are most touching as she cries both at the beauty of watching a top athlete in action and from worry that Nyad is obsessed with an unattainable goal.

The quest seems simple enough for the high school basketball players in the documentary Medora: Win one game. That's it. Just taste it once. But the Indiana town is dying, the senior class has only 16 members, and the team has lost 44 straight games. Davy Rothbart read a New York Times story about the town of Medora and alerted Andrew Cohn. "He forwarded me the link, and the next day we drove down to Medora," Cohn recalls. "As lifelong friends, fellow Midwesterners, and basketball fanatics, we instantly knew that this was the film we were born to make."

The filmmakers lived in an old motel, shooting 10 to 14 hours a day, seven days a week, with a small crew, paying for it out of their own pockets (and with the aid of a Kickstarter campaign). "While this can begin to take its toll – physically, emotionally, and financially – it also gave us a huge amount of creative freedom," Cohn says. "We had nobody to answer to but ourselves. Slowly, our subjects and the people within the community began to trust us, generously opening their lives to us. That's when we were able to break through and capture those raw and intimate moments you need in this kind of film. I think the deeper you can go, the deeper you should go."

This is a very American story: Factories have closed, drugs are a rising concern, small-town life is fading. Rusty's mother is an addict, and he ends up living with a teammate's family. Dylan wants to go to Bible college but is a smiling wannabe ladies' man. Robbie has learning disabilities and hopes to be the first in his family to complete high school. Think Hoop Dreams with acne and a double-wide trailer.

It follows a tradition of sports documentaries that are about much more than winning or losing. As The Short Game's Greenbaum says of Kournikova: "Time and time again on the course, he would have a discussion with his caddy about an important decision they had to make, and he would more often than not go with his gut. And you quickly see there is incredible power in confidence and self-assuredness."