You're Next, AJ Bowen 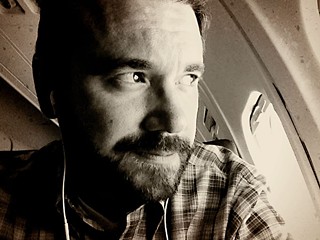 If you've never heard of him, he wouldn't be shocked. He said, "I've resigned myself to being involved perpetually with projects that five to 10 people see, and most of those people are related to me." His signature roles have been in underground shockers, from The Signal's mentally imploding husband to his award-winning depiction of a serial killer in A Horrible Way to Die. Dramatic irony time: Bowen doesn't enjoy onscreen brutality. He said, "I can't watch A Clockwork Orange. People look at me like I'm insane; they think I'm saying that it's shitty. No. It's a Kubrick film. That resolves that issue. But I can't watch people do ugly, terrible things to people." So how does he square that creative circle? Because, for him, it's about the underground, not the shock. He said: "There's this misconception that I'm just a horror guy. That's partially true, but the world that I end up living in most of the time is actually this weird, strange, independent art world."

His two SXSW films could change his "underground horror guy" rep forever: Austin-lensed Grow Up, Tony Phillips, a delicate teen rom-com where the clothes stay on; and You're Next, a home-invasion flick with glacial family dynamics that would make Ibsen wince. That brutal/cerebral thriller is spawned from the loose affiliation known as mumblecore: Written and directed by his Horrible Way collaborators Simon Barrett and Adam Wingard, You're Next reunites Bowen with scene mainstays Joe Swanberg and Amy Seimetz. A U.S. debut at Fantastic Fest 2011 showed the trademark awkward personal relationships remained but with Friday night multiplex-pleasing action mixed in. After a ferocious bidding war, it disappeared into Lionsgate's vaults. Now it's penciled in for an Aug. 23 release, but first it breaks loose for three SXSW Midnighter showings. At 35, Bowen is phlegmatic about the claims it will be the next Scream ("I've done enough bad movies," he said, "and I've done enough good movies where I was really fond of them and people shit at them that it's all arbitrary to me.") However, festival director Janet Pierson loved it so much she broke her informal rule about not rescreening another Austin festival's debut.

As a SXSW and Fantastic Fest regular, Bowen is an honorary affiliate of the Austin film community, a position he secures with local enfant terrible Emily Hagins' latest feature. He plays Pete, the ne'er-do-well cousin of Halloween-obsessed high school senior Tony (Hagins' My Sucky Teen Romance star Tony Vespe, brother of Ain't It Cool News mainstay Eric Vespe, aka Quint). Bowen flew to the set of the micro-indie pretty much straight from the set of his next major picture, Ti West's The Sacrament. So why scale down to Hagins' Kickstarter-funded project? The best reason: He wanted to. "I like her brain, and I wanted to work with her, and I knew that one of my best friend's brother, who is a pretty good actor, was going to be in it. So yeah, I absolutely wanted to do it."

His peers know why they keep hiring him: He does films that call to him, with people he likes, and he delivers a scene that sticks. In Grow Up, he puckers up for an extremely awkward kissing lesson with Vespe. Likewise, he tilts You're Next on its head with a three-minute monologue to co-star Sharni Vinson. Just before its Fantastic Fest screening, she called Bowen "bar none, the best actor I've worked with to date." She recalled: "The day we shot that scene, I was just blown away. I couldn't believe that somebody could deliver four pages of dialogue so convincingly."

Whether You're Next is the summer smash Lionsgate wants or not, Bowen seems content with where he's heading. He recently finished a script with Smashed co-writer Susan Burke and is focusing on what he wants next. He said, "I'd reached a point of stagnancy where I was like, 'I'm done being the heavy' – and I mean that literally and figuratively. I'm done being the fat guy that's somehow warm and teddy-bearish, even though he kills people."