The Revolution Will Be Printed in 3-D

Great hope or so much hype? 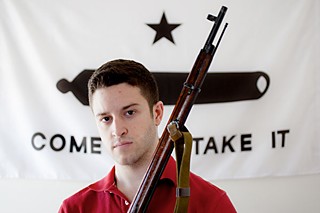 There's nothing wrong with listening to nerdy panelists discuss some hip, new technology. But every time you hear one of these well-groomed featherweights whispering words like "revolution" or "democracy" into the mic, try imagining that person smashing his geek glasses into a shiv then charging with a mob toward the nearest authority figure, screaming ¡Viva la Tecnología!

Still, it seems there's no other way to say it – the civilized world really is experiencing a 3-D printmaking revolution. By "civilized world," we're talking, of course, about South by Southwest Interactive, which will feature more than half a dozen planned discussions on the topic, not to mention that Bre Pettis – CEO of the world's premier 3-D printmaker company, MakerBot, and the de facto face of this emerging technology – is delivering SXSW Interactive's opening remarks.

Revolutions and democracy, though, have a habit of getting a bit, er, messy with factional fighting between progressive forces and ideological purists. Take Cody Wilson, the "radical freedom"-loving futurist who told The Austin Chronicle that many high-profile 3-D makers are "a bunch of Kool-Aid drinkers."

Wilson's made a big, and very unpopular, splash lately for his attempts at a working 3-D printable gun, along with the creation of a nonprofit crowdsourcing website, Defense Distributed, aka "the Wiki Weapon Project." The current enfant terrible of 3-D printmaking and budding provocateur said the media-savvy 3-D makers – Pettis included – prefer to "just represent the Candy Land vision of this technology."

It's not difficult to sympathize with many of Wilson's sentiments (his beef with Pettis began after Wilson's weapon plans were somewhat arbitrarily removed from Pettis' popular Thingiverse). Some of the Interactive Conference's descriptions and titles related to 3-D printmaking – "How 3-D Printing Changed My Life" will cover "the power this technology has in potentially changing the world" – sound as sugary-sweet as Gumdrop Mountain. And then there's the "revolution" itself, which is not only being televised, it's been Web-ized, marketed, and written about to death.

"[3-D printmaking is] at the peak of the Gartner hype cycle, which is a good and a bad thing," said Alice Taylor, founder of London-based 3-D dollmaker MakieLab. "The good thing is, it's completely deserved ... and the bad news is, now we have a traditional 'crash' as all sorts of folks rush in expecting to be able to print themselves a new kidney, or a house on the moon, and being somewhat disappointed that it's not actually quite there yet."

Despite the hype and lofty promise, Taylor said this technology is a "step change" – like the Internet, circa 1995.

"Everyone can see the potential," she said, "but we're not quite sure yet how it'll shake out."

What is clear is that this revolution can and will be monetized and regulated. Recent announcements from the country's two biggest gold diggers – companies and government – prove just that.

During his State of the Union address, President Obama gave a surprising shout-out to 3-D printmaking as one of the industries of America's future, touting the government's $30 million investment into a 3-D printmaking hub in Ohio. "It's probably one of the largest endorsements of 3-D printing that I'm aware of," said Mike Senese, a senior editor at Wired magazine.

When it comes to the advancement of the 3-D printmaking industry, though, Senese said he's most excited about established companies beginning to invest in the technology. Last month, Nokia posted the detail files to its phone case and, in a genius bit of both self-promotion and labor cost-cutting, "challenged" those with 3-D printers to make their own, customized cell shells.

"Nokia is opening up the doors for a lot of other companies to follow behind them," said Senese. "So I'm thrilled to see who's next. ... We're just at the very start, and it's really exciting."

Perhaps unsurprising though, among all the panels covering heady topics like The Future and "revolution" and "democratization" hosted by entrepreneurs with positive press coverage, it's the local college student who'd like to keep things simple, DIY.

"There's lots of technicals about the project that just haven't gotten out there that I'm keen to share," said Wilson. "I'm looking at it as more of a technical presentation."

But if you get a chance, ask him about "using progressive language about information to confuse the prohibitionist impulse about certain objects" and "permissive liberal myth[s]." Or the rhetorical he posed to The Austin Chronicle: "Is this a tool for real change? What does it actually mean in the post-capitalist scarcity area when we all have access to the means of production?"

It's some truly revolutionary talk.

How 3-D Printing Changed My Life

3-D Printing for People with Disabilities

The Future of 3-D Printing 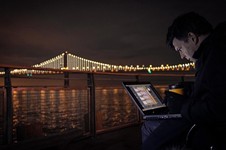