Could Julie Uhrman's Kickstarted project be the innovation the gaming industry was waiting for? 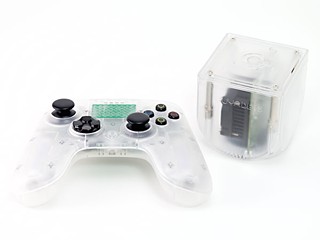 Creative diversity has always been enhanced by lowering the barrier of entry to participate in an artistic endeavor. Technology continues to transform the way we fund, produce, promote, distribute, and consume media by providing more and more seats at the table. When the ability to create content is democratized, the old gatekeepers in any industry are necessarily disrupted. The gate loses its intrinsic value when there are a dozen new ways to get beyond the wall.

While books, music, and film have nearly completed their metamorphosis in response to a post-indie reality, the traditional wardens and watchmen of the gaming industry's gates have yet to fully embrace the brave new world that has been thrust upon them. Trends like crowdfunding, digital distribution, and social media have made it possible for anyone with a seductive idea and technical know-how to enter the ring. Ouya is the first gaming hardware product to capitalize on these new trends.

Ouya, which was conceived and quarterbacked by SXSW Interactive Keynote speaker Julie Uhrman, is an Android-based video game console based around the notion of lowering that barrier of entry. Unlike any living room console to come before it, Ouya is an open gaming and app platform priced at $99. Its low cost and open-source nature have independent developers, gamers, and Android enthusiasts excited to see the journey finally come to fruition.

Uhrman launched a Kickstarter campaign for Ouya on July 10, 2012, to see if her idea had merit in the minds of gamers who have increasingly turned to the site as a way to vote with their wallets on the direction of the industry. The project exploded online, and, when the dust cleared 30 days later, it had accumulated more than $8.5 million in backing – nearly 10 times its original goal of $950,000 – making it one of the most successful projects in Kickstarter history in any category.

High-profile indie developers of all stripes have emerged to lend vocal support or even their games to the cause. Local luminaries like Adam Saltsman (Canabalt, Hundreds) of Semi Secret Software have been quick to praise Ouya's potential. Saltsman says he hopes "if anybody draws any lessons from Ouya, that it will be the idea of foregrounding a relatively open marketplace on an affordable TV-and-controller-based device."

But it's not just developers who are excited for Ouya. Gamers are also intrigued, and the $99 price point makes taking a chance on it more attractive. Playing Android games from the comfort of the couch on a big TV with a controller is also alluring. Some gamers simply want to support an egalitarian business model and hope the low barrier of entry for the platform encourages innovation and risk-taking in game design.

Others, like Wedbush analyst Michael Pachter, don't see the Ouya as a force to push existing console manufacturers to foster more indie development, but rather as a mechanism to make independent games available to a broader audience. Pachter says he doesn't see the big-name platforms altering their strategies: "Sony and Microsoft already have marketplaces for independent developers (PlayStation Network and Xbox Live Arcade). ... I think Ouya is trying to replicate that model and get those same games to people without their having to buy a more expensive console."

For all its wild success to date, Ouya faces a legion of questions and challenges before it can fully establish itself in the marketplace. Can it find an audience with Android gamers who already own tablets and smartphones? Will there be enough good games developed for the platform? A home gaming console lives or dies on the strength of its software offerings, and luring developers to create unique content for the platform will be a major obstacle unless Ouya can quickly grow a large enough customer base to make it worth their while.

Whatever the ultimate fate of Ouya as a gaming platform may be, its impact as a disruptor in the marketplace will not be blunted. It proves that new gaming hardware can be funded and built on the goodwill of the community, and it follows in the footsteps of innovative gaming contemporaries like Steam that demonstrate how new business models can maximize profits by increasing the direct control that content creators have over their products. As David Kalina of Austin's Tiger Style Games (Waking Mars, Spider) puts it: "The one that gets religious about open marketplaces will win the next generation" of console wars.

Win or lose, Ouya is a harbinger of gaming things to come.

with Joshua Topolsky, editor-in-chief of The Verge