Modern Tales as Old as Time

New AFS series travels back to the seat of civilization

Scheherazade, Tell Me a Story

To categorize a collection of stories originating in the birthplace of civilization is nearly impossible, but the Austin Film Society's latest Essential Cinema series illuminates the beauty and pain of life in the Middle East through seven films that connect the dots of humanity.

AFS' seventh iteration of the Children of Abraham/Ibrahim series begins with This Is Not a Film, a documentary that is part peaceful rebellion against the Iranian government, part creative compulsion. This Is Not a Film offers a rare glimpse into 24 hours in the life of internationally acclaimed filmmaker Jafar Panahi following charges against him for disseminating propaganda against the Iranian government. Banned for 20 years from filmmaking, Panahi enlists friend and documentary filmmaker Mojtaba Mirtahmasb to masterfully circumvent legalities and record the essence of a trapped artist. Reportedly smuggled from Iran on a flash drive hidden in a cake, the feature illuminates the surface simplicity of Panahi's routine daily tasks as he constantly battles his creative urges. Panahi views life through a lens, and there is a special poignancy to a fireworks festival erupting just outside his apartment: He can tell a film, but he cannot make one.

Bare-bones media portrayals of the modern ramifications of an ancient struggle between Palestinians and Israelis often avoid the deeply emotional circumstances of a suicide bomber. But director Dror Zahavi's fictional film For My Father forces the audience to consider the whole story: the humanistic tendencies of a man embroiled in the perils of familial woes and complicated political convictions. Strapped with explosives, Tarek (Shredi Jabarin) is unable to free himself, mentally or physically, even as he finds unlikely companionship with an Israeli shopgirl and a curmudgeonly older man.

Yousry Nasrallah's fantastically entertaining Scheherazade, Tell Me a Story examines an Egyptian TV host, Hebba (Mona Zaki), who finds herself at the mercy of patriarchy's constraints. When her political ladder-climbing husband informs her that reporting on the sad and destitute will ruin his career, Hebba begins her initially unintentional reenactment of Scheherazade's quest for survival by way of storytelling via journalistic spotlights. The film fires through rubble and rules of engagement as Hebba hosts several women on her talk show stage. Everything is political in these human-interest stories, from homicide to celibacy to abortion, and on Hebba's TV platform, these so-called women's issues become everyone's issues.

From Eran Kolirin, the director of award-winning The Band's Visit, comes The Long Journey, a 2004 film about a lonely Israeli boy setting his sights on basketball while his family hyperfocuses on their own problems. Actor Alon Pdut will attend the screening on March 19, and a Q&A is scheduled to follow. (The Long Journey wasn't made available for preview, nor was Conquest 1453, a late addition to the series.)

Based on an ancient parable of lovers, Habibi Rasak Kharban mixes expert acting with symbolic sunsets and panoramic ocean shots in a gorgeous depiction of star-crossed love in the Palestinian territories. Former University of Texas student Susan Youssef weaves autobiographical memories with the story of culturally universal soul connections to portray the dichotomy of passion in violence and tenderness. As a modern-day Romeo and Juliet, Qays (Kais Nashif) and Layla (Maisa Abd Elhadi) are ensnared in an even more complicated story riddled with traditional obligations, stray bullets, and gut-wrenching poetry painted in red on city walls. (For more, see "Fusing a Parable With the Personal," right.)

In writer/director Tolga Karacelik's Toll Booth, the maddening monotony endured by Kenan (Serkan Ercan) as gatekeeper of a Turkish tollbooth transfixes the audience as it transforms the protagonist. Nicknamed Robot by a co-worker, Kenan follows his days at the cash register with dull-toned evenings at home with his aging father, watching television reports of a pending meteor collision with Earth. Everything changes when a psychological hiccup results in his transfer to a remote tollbooth where lady love inspires a smile, and hallucinogenic views of fields of sunflowers wreak havoc. A cinematic art installation, Toll Booth is riveting in all of its staccato glory.

AFS Essential Cinema: Children of Abraham/Ibrahim 7: Films of the Middle East and Beyond

March 5: Scheherazade, Tell Me a Story 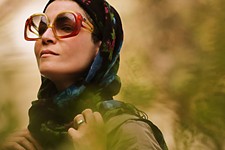 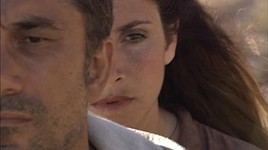 Actually Living With War
AFS's latest Essential series, Children of Abraham/Ibrahim, focuses on the films of the Middle East and North Africa

AFS Essential Cinema, Children of Abraham / Ibrahim, This Is Not a Film, For My Father, Scheherazade, Tell Me A Story, The Long Journey, Habibi Rasak Kharban, Toll Booth, Susan Youssef, Alon Pdut