Fusing a Parable With the Personal

Former University of Texas student Susan Youssef recently answered a few questions between international flights on a media blitz for Habibi Rasak Kharban. Youssef will be in attendance for the March 26 AFS screening of her award-winning film.

Austin Chronicle: I understand Habibi is loosely autobiographical and also based on the classic Arabic story of star-crossed lovers, Layla and Majnun. Tell me about the implications of creating a film so close to your own heart as well as the hearts of many across the globe.

Susan Youssef: Via bringing to the screen poetry and the parable, the film shows that at the basis of Palestinian society is a desire for an expression of love, not violence. Habibi transcends violence as the definition of the Arab world to include the cultural beauty, history, and diversity of the Arabic language and Palestinian people.

AC: The character of Layla faces so many paradoxical themes stemming from the disparities between modern and traditional values for women. Her veil seems to signify shifts throughout the film. Please talk about the feminine perspective in Habibi.

SY: Habibi challenges the stereotype of the oppressed Arab woman both on and off screen. I, the writer, director, and producer of the film, am a woman of Arab descent. Layla, the main character in Habibi, is an educated woman whose parents permitted her to leave Gaza in order that she may study and live on her own in the West Bank. Back in Gaza, Layla takes assertive action to fight for her love affair. The men in her life defer to her actions.

AC: Education is essential to this film as well. Did you write these pieces of the story with your own experiences in mind, or is this more indicative of the cultural significance of education issues in the modern Palestinian territories?

SY: My first journey to Gaza was in 2002, and this was when I fell in love with a director there. Based on my experience with him and the other people in Gaza at the time, I constructed the Habibi story – specifically focusing on the loss of young people's dreams and aspirations around education. At the time, I was a graduate student and this storyline really struck me. I knew how much I dreamt of actualizing myself as an artist, and my heart went out to young people who would never accomplish their dreams because of the occupation. This is a storyline that weaves through each of the young people's lives in Habibi.

AC: What's next for you?

SY: I am currently making Marjoun and the Flying Headscarf. With her father imprisoned on dubious terrorist-related charges, a Lebanese-American teenager in Arkansas searches for identity in the headscarf and a motorcycle. This feature is an extension of the short by the same name that screened at the Sundance Film Festival. Marjoun and the Flying Headscarf is the first fiction feature that explores coming of age into the hijab. 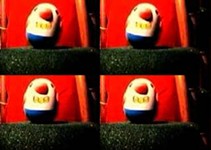