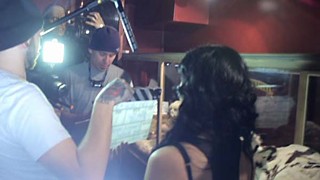 Director Francois Larosa has an important lesson for indie producers: Always have a plan B. That's how his new Spanish-language supernatural show El Otro Lado scared its way onto screens.

Last year, he was pitching his telenovela El Exito Para Las Cuarto to Telemundo Austin, when the famous words came: "Do you have anything else?" Luckily, he did: Just before the meeting, he had started writing a pitch for a paranormal show aimed at Hispanic viewers. He was no expert on the uncanny, but with cable successes like Paranormal State and Ghost Hunters on the air, he was shocked that no Spanish-language networks had a paranormal-centric show. So he drafted a two-page proposal to fill that gap. He says, "I put it together, made a copy, stapled it, and put it in my bag." When the executives asked him if he had anything else, "I pulled it out and said, this is something that I came up with the other day, and it's called El Otro Lado – The Other Side."

Most paranormal shows feature folks in thick outdoor gear hunting overnight in remote locations. The more sedate El Otro Lado publicizes itself as "Las investigadores paranormales ... con tacones" – meaning, paranormal investigators in heels. In the pilot episode, hosts Diane Marques and Victoria Rodriguez try to contact Emily, the ghost of the Tavern at 12th and Lamar, while in episode two, they hunt for spirits at the Villa Main railroad tracks in San Antonio. The third episode, debuting on Feb. 2, takes the duo, with new investigator Irene Gonzales, to the Museum of the Weird on Sixth Street. Larosa was skeptical about claims it was haunted, until the crew's microphone disappeared. He says, "Somebody came, grabbed it from seven people, and hid it. The batteries of our cameras, which never go flat, were all being juiced out completely."

TV was not Larosa's plan A. Formerly an actor, he admits he only took theatre as an elective while studying psychology at Texas Tech "because I needed it to graduate, but I never saw myself in this field. People would talk about New York and California, and they'd ask me, 'Francois, what do you want to do?' Well, it's not going to be acting, that's for sure." After graduating, he practiced social work with Travis County while polishing his stage skills, until a friend at the Texas Film Commission suggested he try picking up some extra work. That parlayed into brief appearances in Red, White & Blue and Machete, even growing a beard for a short role in The Alamo as a Mexican officer. He says, "I'm doing social work with clients with mental health issues, and as time progressed I started having a beard and my hair was scraggly, and they started asking me if I was OK." Acting became directing and now his firm Starfield Productions is finishing I, Me, American – a Mexican-American view of the Iraq War – while Larosa re-edits his psychological thriller The Reincarnation of Jesse Belle (see "Film News," Nov. 7, 2008).

After that, he's prepping a script about voodoo in 19th century Austin. But with El Otro Lado halfway through its six-episode run, he's hoping the show gets picked up for a second season. That two-page treatment could become his day job, which was never plan A. Fortunately, he had the wisdom of another TV producer to guide him. He says, "I was trying to get advice from her and said, I feel like I'm in chaos, and she said, 'Well, then, you're doing alright.'"

El Otro Lado screens on Telemundo Austin, Saturdays at 12:30am.