Goodbye to This Millennium's Must-See TV

How '30 Rock' reshaped the sitcom for the digital age 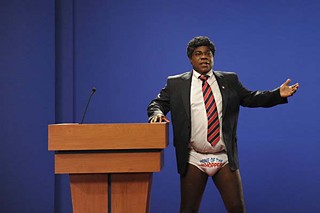 There was a blink-and-you-miss-it moment in 30 Rock's second season that made it obvious Tina Fey's show about a show had become a millennial-age banner bearer. It's a moment so tossed off as to seem inconsequential, and yet: It announced that 30 Rock is – and soon to be was, when the show goes off-air Jan. 31 – a comedy made from and for the Internet age.

It was in the season's second episode, "Jack Gets in the Game." Tracy (Tracy Morgan), the outré star of fictional sketch program The Girlie Show, has just been thrown out by his wife. As he recounts memorabilia collected throughout his career, the show lends immortal potency to an ephemeral detail:

Tracy: "This is my key to the city of Gary, Indiana! ... And my gold record from [my] novelty party song."

It was a mere seconds-long cutaway – long enough for your senses to register its creative genius, but brief enough that if you looked down at your phone, you missed it. 30 Rock, which debuted in 2006, produced so many bits primed for YouTube immortality, where the show's arch humor could live intact online, in isolation and removed from context. In that moment – among so many rapid-fire non sequiturs, pop culture callouts, and general Simpsons-ian mania – you didn't need to know what episode "Werewolf Bar Mitzvah" was from, or even that you were watching 30 Rock, for it to register as funny.

30 Rock – and really all of NBC's rotating lineup of critically lauded but often lousily rated sitcoms, which includes The Office (also signing off this year), Community (its prospects dimming after showrunner Dan Harmon's ousting), and Parks and Recreation – rose mightily to the challenge of making episodic TV in an era where the Web has made every facet of entertainment episodic. Because online, everything is in bits and pieces: on one site, but not the other; fabulous on its own, and even better together.

These shows became comedies of the Internet's deconstruction, easily disassembled into their defining catchphrases: "Blurgh." "That's what she said." "Treat yo self." "Darkest timeline." But there's an Internet-era complexity to this deconstruction: Each of those individual zingers, memes, and viral moments, their individual ingredients, work completely on their own and as assembled by their creators. Just as a Web page is made up of its individual bits of code, an episode of 30 Rock could play like YouTube clips sequenced together by Tina Fey.

30 Rock also stood out because its movements mimicked the constant, speedy clip of the Web. Seconds after Tracy's "Werewolf Bar Mitzvah" interlude is another, different aside. And then another one. And after that, more still – for a full 22 minutes, it's a continuous succession of punchlines, visual gags, and perfect retorts. While we may be living in a golden age of television drama, for a time no other shows were able to understand and reflect the high-speed Internet generation's sense of humor in as fundamental a way. (New shows like Happy Endings, Don't Trust the Bitch in Apartment 23, Raising Hope, and New Girl have since expanded the field.) 30 Rock and its NBC brethren not only riffed on the goofy, pop culture heavy nature of the Web, they did it by replicating the way it works – meta, in the funniest way.