DIY, and So Can I 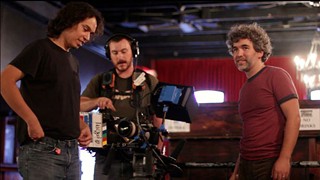 Mario Troncoso is in the Sky Candy studio, tucked behind the H-E-B on East Seventh in a converted former tortilla factory that's also home to local artisans like East Side Glass and Hops & Grain Brewery. It's Friday, Dec. 7, the night before the aerial circus arts company makes its debut at the State Theater – and people are practicing their craft. For the Sky Candy members, that means they're stretching a lot, painting sets in rushed preparation, and warming up to start dangling from the ceiling. For Troncoso, producer and director of KLRU's Arts in Context, that means asking questions of the aerialists as they do their best not to look directly into the camera. Troncoso looks relaxed as he does it, playfully inquiring about the nature of the work.

It makes sense that Troncoso would be comfortable in this role. The 38-year-old filmmaker has been producing these 30-minute documentaries at a pace of one every four weeks for the past year. He doesn't have a background in asking questions, but with that kind of turnaround, it's to be expected that he's getting used to it. Troncoso produces 12 episodes a year, and each episode is its own creation, eschewing an easy narrative format or a standard approach, in order to tell the story of whatever Austin arts entity Troncoso's lens is focused on.

"Every episode is unique," says Troncoso. "Every story is its own." Sometimes that's the story of a still-young organization like Sky Candy, which is about to take the leap to one of Austin's bigger stages; sometimes it's an internationally acclaimed project with big money behind it, like Fantastic Fest; sometimes it's a quirky-but-impressive group like Trouble Puppet as they work on an ambitious show. Troncoso chooses all of the subjects for the series himself and is the only KLRU employee who works on it full time. His crew is made up of freelancers, which means that Troncoso is always working. "I have four weeks to research, produce, and edit every documentary. That's totally insane."

Also insane: hanging upside-down from a metal ring 15 feet above the ceiling; starting a film festival in a city already overrun by festivals and specializing in international genre pictures; telling stories ranging from Upton Sinclair's The Jungle to Macbeth to Frankenstein with only a cast of puppets.

In other words: Whatever is insane about the schedule that Troncoso keeps in order to produce 12 episodes of Arts in Context a year, it's something that all of the subjects of his films can relate to.

Mario Troncoso first moved to the U.S. in 2000 because he wanted to be a filmmaker. "I left everything behind. I left my family, my business – I had a bar, a music venue, in Madrid – I told my family I was going to make movies and I had to get out of here, because I knew it too well." He took off to Houston, initially, to shake off that familiarity. "It was great to go to Houston, because it was such a different place from Madrid. The city, the people, the underground communities, the scenes – I needed that. You know how sometimes reporters will go to a third world country, because they need the culture shock? That was my culture shock, Houston."

Troncoso planned to start in Houston, where his best friend lived, before going out to New York to study film at NYU. But Troncoso never made it to New York. "I got stuck in Houston for four years," he says, explaining his reason: "You know – women." When he returned to Spain at the end of 2003, he was married to an American, whom he'd met doing documentary production in Houston. He spent four years in Madrid editing nature documentaries before they decided to return to Texas – this time to Austin, where he planned to finish his bachelor's degree in film at UT, while his wife pursued her master's. He soon began working with KLRU as an editor, and when the station was looking for someone to take over the Arts in Context series, he was available.

The series began in 2011 as a show called In Context, and it aired on an ad hoc basis, when episodes were prepared. Troncoso came on board at the start of the second season, which featured Opera Odyssey, the Austin Lyric Opera's camp for children – and he co-produced the next five episodes with Lauren Burton. The pair won a Lone Star Emmy in November for the episode on Trouble Puppet before she moved on, and he was presented with a choice between moving on himself and sticking with the series.

"It was that or producing reality TV, which pays a lot of money," he says. But ultimately, for Troncoso, sticking with KLRU was a decision that made sense to him for the same reason that Sky Candy's performers suspend themselves from the ceiling of the State Theater. "I'm a starving artist, too," he says. "Here, I have full creative control, and this is what I want to be doing."

Different working artists in Austin operate on different levels. Some, like Troncoso and Arts in Context, have the backing of a small-but-stalwart institution like KLRU. Others, like Sky Candy, spun off with the support of an organization that had been there before (in Sky Candy's case, the Vortex Repertory Company). Some are independent passion projects, like the subject of October's season three premiere, orchestral indie rockers Mother Falcon. Some, like the improv comics of the Hideout and Coldtowne Theater – who'll be featured in an episode next summer – have bootstrapped themselves into existence slowly. Some are quixotic creations that require a 30-minute documentary to properly explain, like The Intergalactic Nemesis, whose episode will air in March. An organization like Opera Odyssey, which was the first that Troncoso featured, is rooted in education, while someone like dancer Sharon Marroquín, whose story will be told in February, uses her art to express a personal struggle. None of them makes much money.

All of the projects featured in Arts in Context define success outside of financial terms, which usually involves making something that the artist are proud of, and doing so with people they like working with. It's a community-based approach to art; for all of the growth the city has seen, Austin is still very much a small town in the way that its arts communities overlap. (Troncoso has interviewed composer Graham Reynolds for the Arts in Context episodes on Trouble Puppet, The Intergalactic Nemesis, and Mother Falcon; Sky Candy's Winnie Hsia is also a volunteer coordinator at Fantastic Fest, and was interviewed for both episodes.) The fact that Troncoso – whether he's telling the story of Sky Candy or another arts group – is both bearing witness to the art being made and making some of his own feels very appropriate for a chronicle of the Austin arts community.

"DIY art is the main type of art here," Troncoso says. "If the show is about fine art, then I'm misrepresenting the city. The city is getting big because of this type of art: people getting together, and struggling because nobody's making any money, to make great art. And because there's not a lot of money involved, they're able to do great things. If they were other places, maybe they don't have that chance." There's not a standard format to every documentary in the Arts in Context series, but Troncoso does have one question that he asks everyone: "Could you do this anywhere other than Austin?" He says that the answer is always the same.

"People do it here because it's Austin. It's this community. These things happen here because these people are here, and are willing to do it." That's a viewpoint that Troncoso is able to relate to. "I feel the same. That's how we do the show, too. We do the show because we make it happen. We don't make much money. If we don't have a flap for our camera, we make one with beer cartons and we tape it with gaffer tape, and that's how we do our production," he says.

It's thrilling, as one watches the series of Arts in Context documentaries in order, to see that spirit come out in the various artists working in Austin. Financially speaking, something like Fantastic Fest – which brings Hollywood money and movie stars to Austin, and packs hotel rooms for a week every year – is a much bigger deal than the premiere of a new show by a young company like Sky Candy. But put into context by Troncoso and his series, it becomes clear that it's all one story being told. It's a story of what it's like to be an artist in Austin. That's something that doesn't change that much, whether your medium is puppetry, circus arts, planning the world's funnest film festival – or a scrappy public television documentary series that tells all of those stories to the world.

Arts in Context airs on the last Thursday of every month on KLRU. Arts in Context's next episode, on the La Junta Heritage Center in Marfa, airs Thursday, Dec. 27, 7:30pm, on KLRU. 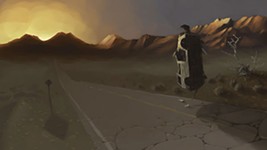 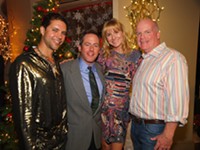 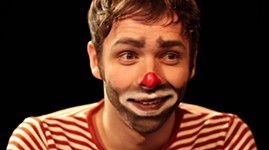