Law and Order in the Land of Pixels 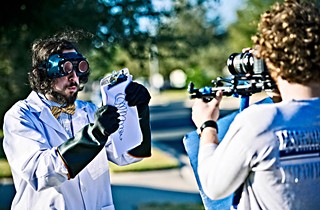 Austin-based Blue Goggles Films likes to tap the dramatic potential of video game strategy, aesthetics, and idiosyncrasies for the purpose of narrative film. Case in point: the production company's web series BIT Parts, which treats as real life the elaborate fantasy worlds of various video games, such as Grand Theft Auto 3 and Red Dead Redemption. Jolyn Janis and Brian Villalobos play, respectively, Agents Zero and One, members of the Binary Investigation Team (B.I.T.), an agency that looks into problematic irregularities in video game programming and design. That may sound a bit dry, but consider: One of the "irregularities" they investigate is a sergeant in the Halo first-person-shooter franchise who regularly teabags enemy corpses.

The cast of the series play their roles in straight-man mode, never breaking character long enough to acknowledge the absurdity of so much seriousness. Janis and Villalobos are understated and charismatic, and Shannon McCormick is convincing as the villainous Debug. The series' plotlines resemble satirical X-Files episodes in miniature, except, as writer/director/editor Ben Moody puts it, "The agents are the aliens." Along with the aforementioned Halo, Grand Theft Auto, and Red Dead Redemption installments, there are also episodes dedicated to the peculiarities of Paperboy and Metal Gear Solid available online. The content is naturally somewhat limiting for a general audience. You don't have to be gamer to get the series, but it helps. The finale of the first six-episode run concludes with a cliffhanger surrounding the agents' awareness (or the lack thereof) of "us," the players.

What sets BIT Parts apart from so many other low-budgeted, web-based passion projects is the strength of its production values. This is no shoddily patched together YouTube lark. The cinematography and editing are slick, and the effects, though created on a shoestring, are both impressive and convincing. Still, even a shoestring costs something, and to that end, Blue Goggles co-founders Ben and Rachel Moody (a husband and wife team) have launched a Kickstarter campaign (www.kickstarter.com/projects/bluegogglesfilms/bit-parts) to fund episodes 7-12 of a proposed 24-episode season that will follow the exploits, conspiracy theories, and industry inside jokes investigated by Zero and One.

So far, Blue Goggles has fallen short of its fundraising goal (the campaign ends Saturday, Dec. 15), but with six episodes already finished and a full season of scripts in the works, the obstacles in the way of producing 12 episodes by the summer of 2013 are far from insurmountable. If the company fails to reach its fundraising goal via Kickstarter by Dec. 15, the Moodys will weigh finding alternate financing to complete the series against abandoning it in favor of other projects. "It all comes down to money," Rachel explains. "This is a test so that viewers can let us know if they want this or not."