Viewed From the Future

Sandy Carson is a space explorer. He's a photographer by trade (one quite familiar in the halls of the Chronicle, actually, as a longtime contributor), and a Scot by birth. But he's spent the better part of his life touring the U.S. on his bicycle, peering into spaces otherwise left for dead, to find memories of things past, not unlike the way The New Yorker's late writer Joseph Mitchell collected artifacts of the city's crumbling architecture.

"I'm always rummaging around derelict buildings and abandoned houses wherever I am," Carson says.

Whereas Mitchell focused on odds and ends, like nails and doorknobs, Carson considers a stack of old photo slides or misplaced Super 8 footage a real score. He's looking for evidence of that American Dream he saw depicted in photos and films when he was a kid.

"America just had a different light," he says. "And when I finally got over here, the light looked just like in the pictures."

Recently, Carson gathered a selection of Super 8 and 8-millimeter films onto a single digital reel, piecing together his own portrait of the American Dream, fashioned from long rows of palm trees, swimming pools, and Ford Fairlanes. The six-minute film shows as a projection this Friday at the University of Texas' Visual Arts Center, as an addendum to the opening of his photography show "Yet, By No Means," with Emma Whelan. (See "The Immigrant Experience" for an interview with Whelan and Carson.)

Strung together randomly, the footage exudes the inherent irony of its discovery. Presumedly, the people who captured these rather banal moments believed them to be important. Or perhaps, like so many of us shooting endless video on our smartphones, these amateur cinematographers were too fascinated with the functionality of the technology to question its usefulness, creating reams of instantly dead content. These moments are captured on film, but lost forever to the viewer behind the lens. Either way, the footage has been collecting dust, and without context, it's meaningless to most of us.

But Carson is the anti-Bartleby; that is, unlike that dead letter office scrivener, Carson sees purpose in the pursuit. He runs the footage together, then overlays ambient music with space exploration transmissions. I picture his descendants rummaging through homes centuries from now in space suits, space bikes parked outside. 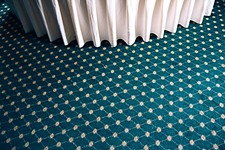