New Formula One documentary '1' world premieres at the Paramount 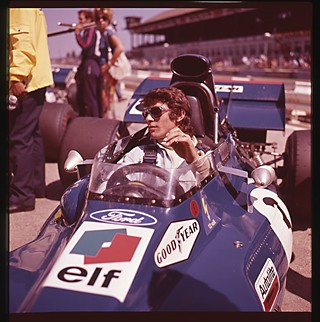 Francouse Cevert in archival footage from the documentary 1 – photo by Jutta Fausel, 1971.

Formula One was lethal. Between 1952 and 1994, 32 drivers died in the world championship hunt, and another six during testing. Drivers were more likely to die on the track than become world champion. Yet while it was the worst of times, many drivers and fans saw it as the best of times for the sport – fun, freewheeling, and thrilling – and new documentary 1 reaches deep into the archives to find the blood and glory on the tracks.

Even though there are more established F1 cities, producer Michael Shevloff saw Austin on the weekend of its first United States Grand Prix as the obvious choice for the world premiere. His production company, Spitfire Films, has previously screened two films at the South by Southwest Film Festival – Foo Fighters: Back and Forth in 2011 and Undefeated in 2012. Moreover, all eyes will be on the city for its inaugural United States Grand Prix. It set a tough deadline for director Paul Crowder, who was still working on the mix less than a week before the world premiere. However, Shevloff knew the Austin Grand Prix was the right place to drop the flag. He said, "It's the race of the year, and that's what everyone's saying."

Shevloff thinks film fans who know nothing about open wheel racing will be lured in by what he calls "Dallas on four wheels." But racing buffs will see a panoramic history of an era when circuits, teams, and drivers were in a perilous battle to be fastest, with little regard for safety. Crowder was Shevloff's top choice for director – as roommates, they used to watch F1 together – but this wasn't a sentimental favor for a friend. As the editor of Riding Giants and Dogtown and Z-Boys, Crowder knew his way around sports documentaries. Shevloff said, "We designed an idea and structured something that we thought would lend itself to Paul."

The first challenge was getting access to F1's footage. Shevloff's dad knew FIA [Fédération Internationale de l'Automobile] Deputy Race Director Herbie Blash, who gave them access to F1's top man: the mercurial Bernie Ecclestone, who is notoriously protective of the sport's archives. However, Shevloff said, "We hit at the right time with the right idea and the right combination, and persuaded him that now was the time to tell this story." Still, the film could not depend solely on what F1 loaned them, since those archives only go back to 1981, when Ecclestone acquired the sport's global TV rights. Shevloff said, "We scoured the world and found what we think is the best assembly of stock footage for Formula One ever put together."

Crowder had thousands of hours of footage, plus contemporary interviews with 60 legends of the sport. It was so overstuffed that racing giants like Stirling Moss ended up on cutting room floor. The vintage footage was an embarrassment of riches from a time when filmmakers had unfettered access. Crowder mentioned pit cameraman Roy Pagliacci, who "was just following [driver] Jacky Ickx around with his Super 8 at Monza in 1978, and we were able to use some shots from that." One piece of footage would lead to another: "You keep seeing people with cameras in their hands, and you think, who's that guy? Find him, call him." The challenge wasn't finding footage so much as finding the original masters. Like a driver depends on his mechanics, Crowder credited his "team full of researchers who really know how to look for the gold, and made the connections with the filmmakers and vendors." It all allowed Crowder to celebrate the skills of four decades of trackside cinematographers. He said, "The way they are able to rack and focus a car moving at 200 miles per hour on a long lens, all the way round the corner, to them and then on the zoom past, and keep focus all the way – you don't see that kind of quality filmmaking these days."

More importantly for Crowder, finding so much footage allowed him to assemble scenes using multiple angles – a privilege unheard of for most archive-trawling documentarians, who are lucky to get anything. He said, "Whenever people have screened this footage before, you've only been able to watch it in this singular form." Take the massive multicar crash at the 1973 British Grand Prix at Silverstone. On the day, there were six different camera teams at the track, and the research team hunted them all down. Some of the footage was truly surprising, like that of a documentarian following the drivers' wives and girlfriends. Crowder said, "Not only do we have umpteen angles to show the intensity of the accident, but we were able to show the reaction from the wives of these drivers as well." What amazed Crowder the most was the cameraman's discipline. "With an 11 car pileup behind his back, he managed to keep his camera facing toward the women and not think, 'Gee, shouldn't I be getting this accident?'"

SXSW and the Circuit of the Americas present the world premiere of 1 at the Paramount, 7:30pm, Nov. 15. See www.austintheatre.org for ticket info.