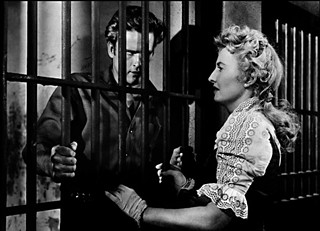 The first time we see Jessica Drummond, who is played by Barbara Stanwyck, she's dressed in black, riding a white stallion, and leading a swarm of forty men on forty horses. The galloping hooves kick up quite a dust cloud as they descend through the black-and-white CinemaScope frame into the tiny Western outpost of Tombstone, Ariz., and nearly obliterate the image on the other side of the frame – a buckboard wagon, which is carrying the three Bonnell brothers to town. It's a study in contrasts that will continue throughout Forty Guns: the domineering woman who gives as good as she gets and the pacifist man who has no desire to kick up any dust.

Forty Guns is one of the great Sam Fuller's best movies, and it is being presented this Sunday at the Alamo Drafthouse's Cinema Club by The Austin Chronicle Editor Louis Black in honor of the centenary of Fuller's birth. Of all the filmmakers that we've written about throughout the Chronicle's 31 years of existence, I'd wager that few have received more ink than Fuller. The films of Sam Fuller are a love affair that Louis and I nurtured through our pre-Chronicle years as graduate students writing program notes for CinemaTexas, the former student-run, film-exhibition program at the University of Texas. I'm happy to note that we're still singing the praises of Sam Fuller.

One of the most adept of the B-movie makers, Fuller brought his background as a soldier, newspaperman, and pulp-novel writer to the world of his films. Punchy and iconoclastic, Fuller's films buck the norms. Often, they seem to play both sides against the middle, allowing no parties to corner the truth. He sets up a conflict and lets the pieces fall where they may. Europeans might call it a dialectic, and it's no wonder the young French New Wave critics and filmmakers championed Fuller's movies. It's in Jean-Luc Godard's Pierrot le Fou that Fuller makes a cameo appearance as a party guest and utters what has become his most quoted line: "The cinema is like a battleground. Love ... hate ... action ... violence ... death. In a word: emotion."

Released in 1957, Forty Guns caps Fuller's first decade as a filmmaker. As described above, the opening scene sets the stage for the archetype-busting that's yet to come. The implication is that Stanwyck's Jessica Drummond owns those 40 men and what they're packing, within and without their holsters. Griff Bonnell (Barry Sullivan) is a retired marshal who quit his life as a "legal killer" after shooting to death a young boy. But while passing through town Griff arrests Jessica's no-good brother Brockie (John Ericson), who is terrorizing the townspeople with wild gunplay. Despite this, Griff and Jessica fall in love while a violent storm kicks up around them.

"Hell if I know why people think guns are sexy," Fuller is quoted as saying in A Third Face: My Tale of Writing, Fighting, and Filmmaking. This doesn't prevent him from turning this Western into one of the great movies about girls and guns. Some of the dialogue is over the top, as when Jessica asks Griff if she can feel his gun. When he tells her no because "it might go off in your face," she tells him she'll take the chance. Another scene shows Griff's brother Wes (Gene Barry) in a gun shop discovering the girl he will marry through the sights of a rifle he is examining. Spoiler: Later, Brockie kills Wes during the wedding ceremony. "See," Fuller continues in The Third Face, "one goddamned bullet has always been decisive, from Sarajevo to Dallas." In the film's dramatic climax, Griff is compelled to kill Brockie for murdering his brother, but at the moment of their confrontation, Brockie pulls his sister Jessica in front of him and uses her as a human shield. Defying expectations, Griff indeed shoots Jessica in the leg, causing her to drop to the ground, allowing Griff a clear shot at her sorry excuse for a brother. Walking past them, Griff tells a bystander, "She'll live. It's only a flesh wound." And with that, Griff's past 10 years of pacifism are obliterated.

If Fuller had had his way, Griff would have killed Jessica in the end as well as her brother, but the studio balked. When you're shooting down shibboleths, it seems you're not allowed to take aim with a fully loaded barrel. 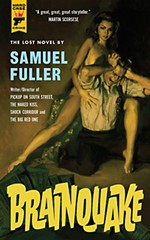