A lot can change in a quarter of a century, including the various identifiers adopted by the queer community. The Austin Gay and Lesbian International Film Festival's vision certainly includes bisexual, transgender, questioning, intersex, and asexual interests, but you wouldn't known it by the "check one or the other" name. So, after 25 years, aGLIFF is rebranding itself as the Polari Film Festival, taking its name from a centuries-old type of British slang used by the gay community, especially those working in theatre. (See Gay Place post "To Zhoosh or Not To Zhoosh" for a conversation with Polari board members about the name change.)

The Polari Film Festival runs Oct. 3-7 at the Paramount Theatre, Stateside at the Para­mount, Alamo Drafthouse at the Ritz, and Violet Crown Cinema. The festival kicks off Wednes­day with Thom Fitzgerald's road trip movie Cloudburst (starring Olympia Dukakis), followed by an afterparty at Lanai with DJ Mark Denim. Other highlights include an Oct. 5 screening of Centerpiece Film Fourplay, directed by Kyle Henry and filmed in part in Austin, and Oct. 6's Out of the Box party at Elysium, featuring performances by Justin Vivian Bond and Christeene. See www.polarifest.com for full lineup and ticket info. 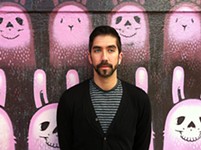 Deep-Seated Divans and Homo Sectionals
'Don't just sit there!' implores Polari, giving us every reason to