That Time We Blowed Shit Up Real Good 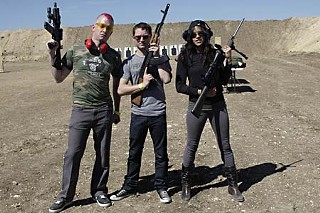 It's not every day that you get to see a Hobbit firing white-hot rounds off a full auto AR-15. Or Avatar's tomboy grunt Trudy Chacon cracking up as she attempts to master a combat throwing axe. Or a 15-foot-long Nazi banner prop from the Alamo Drafthouse's Inglourious Basterds premiere reduced to toxic tatters after losing a shooting war (again) with the ordnance-heavy guys from Austin's "tier-one security service" the BlackStone Group. But we were there and we blowed shit up real good.

Fantastic Fest's yearly excursion "Rambo 101" is the live fire equivalent of playing army as a little kid. It's Fest overlord Tim League's chance to win incoming filmmaker's hearts and minds (and hearing) out of the reel and into the real, and the 2010 outing, with Elijah Wood, Michelle Rodriguez, the dynamic Zellner brothers duo, and local design shaman Marc English was downright apocalyptic. Imagine all the black-steel, high-powered weaponry from all your favorite cinematic shoot-'em-ups; now imagine that you get to play with them all day. (Also imagine League sporting a pink mohawk.) Sick, right? Hellzyeah. I'm not a gun guy, but watching that Basterds prop shredded by 5,000 rounds from a firing line of professional badasses is a sight I'll never forget. Of course, I now own a huge Nazi banner coated in incredibly carcinogenic blowback – lead, cordite, etc. – but what the hell, you only get to bring this kind of noise once in a lifetime. Take that, Hitler/Sauron/Resources Development Administration mercs!

For details on this event and others see our Fall Arts Calendar.