A Woman's Place Is in the Mosque

AFS Doc Night: 'The Light in Her Eyes' 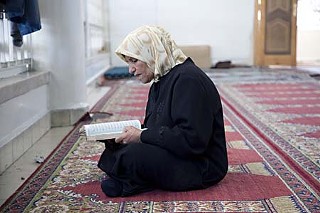 The Light in Her Eyes

Here's a film about women and Islam that's bound to push a few Western buttons and shake up some cultural assumptions. In secular (pre-uprising) Syria, where women were not required to wear the hijab head covering, Houda al-Habash, the subject of Julia Meltzer and Laura Nix's film, The Light in Her Eyes, chose to wear it. Houda is an Islamic preacher and the founder, 30 years ago, of a Qur'an school for girls held in a segregated section of a Damascus mosque where, starting at an early age, girls spend their summer vacations memorizing the Qur'an. Contrary to the conservative Islamic clerics' view that a woman's place and prayers are not in the mosque with the men but solely in the home, serving her husband and children, Houda, an observantly dutiful wife and mother, happens to believe that Islam demands that women be educated, religiously and secularly, as well as free to have lives and jobs outside the home. And the hijab? Not a denigration of Muslim women, as many of us might assume, but now, recontextualized as a feminist gesture, a symbol of a woman's identity.

Welcome to the Women's Mosque Movement, part of a global Islamic revival, in which women like Houda actively choose to be religious and girls' schools, like Houda's, seek liberation for women through intellectual ownership of Islam – much like it was during the "golden age" of Islam, when women commonly were teachers and religious leaders.

Meltzer met Houda while living in Damascus in 2005. She and Nix shot the film from 2009 to 2010, before the current upheavals began.

Austin Chronicle: Was it as paradoxical for you, as it was for me, that an educated woman like Houda, living in a secular society, would voluntarily embrace for herself, her college-age daughter, and her students, the constraints that feel to many like a step backward?

Julia Meltzer: For Houda and the women in her community, living life according to a stricter interpretation of Islam is not constricting. She was raised within a traditional family, and wearing the hijab and taking on the traditional roles of being a wife and mother is what women in her family have been doing for generations. Most likely, to abandon these traditions would feel more awkward for Houda and her daughter. The changes that Houda is making for her daughter and those who come after is to emphasize that education – both religious and secular – is a requirement of Islam. By emphasizing this interpretation of the Qur'an, Houda is making space for girls to become Islamic scholars and for women to lead public lives if they so choose. This is a radical step for her community.

AC: What is your sense of what Houda gets from the Qur'an and why she thinks it's important that girls memorize it?

JM: Memorizing the Qur'an is a tradition that dates back to the time of the Prophet Mohammed. Memorizing and chanting the text was the way that the Qur'an was passed down for centuries. The Qur'an is a revealed text and Muslims consider it to be the word of God. Those who memorize and chant it perfectly are considered master memorizers or "haafizaat."

Houda believes that it is important for girls to have some verses of the Qur'an memorized because then they have the word of God written within their heart. As a pious believer, she wants her students to be protected by the word of God, even if they are only able to memorize a few verses. The Qur'an contains many different messages, rules, and ethics for how to live as a Muslim. Much of the verses are about how to have patience and be able to sustain oneself through the struggles that life presents. Houda wants her students to know how to live according to "the straight path" of Islam and to be pious in front of God. The Qur'an teaches these things.

AC: What, having made this film, surprised you the most about Islamic women?

Laura Nix: When I got involved in the project, I think I had typical Western prejudices about Muslim women, assuming that their religion had to be an oppressive force in their lives. Although raised as a Protestant, I grew up in a primarily secular culture, with one parent who strongly rejected religion. So I had some knee-jerk reactions against people who strongly identified with their religion. It was eye-opening to see a teacher like Houda using religion to teach girls about women's rights within their faith. I didn't think that was possible.

Amongst the younger girls we saw some impatience with memorizing, but it was no different than the reluctance any younger person might have who doesn't feel like focusing when they're supposed to. However, Houda's older students who were in college or graduate school, and her students with families, made big sacrifices to take the time to memorize the Qur'an. I found their focus and discipline inspiring.

AC: What do you want the audience to take away from your film?

LN: I hope audiences will gain a better understanding of mainstream conservative Islam, and how it differs from the more extreme practice of Islam that we often hear about in Western media. By teaching each other about Islam, women in the Middle East are proving to play a significant role in the religious revival taking place there, and I think that activity has the potential to change many Western assumptions about Muslim women.

I also hope audiences will welcome a view into Syria that's not defined by the current violence. When we filmed, it was tense there, but it was really a peaceful place.

The Austin Film Society's Doc Night screening of The Light in Her Eyes takes place Wednesday, Sept. 19, 7pm, at the Alamo Drafthouse South Lamar. Filmmakers Laura Nix and Julia Meltzer will be in attendance for a Q&A after the film. See www.austinfilm.org for ticket info.