A Tug of War Between Art and Morality

Back in the late summer of 2010, a 98-year-old oil painting by Austrian expressionist Egon Schiele sat in a warehouse in Queens, New York.

By that point the painting – titled Portrait of Wally, after Schiele's mistress and muse Valerie "Wally" Neuzil – had been locked in a crate for more than 10 years, the much-contested centerpiece of a federal forfeiture case that had been brought by the United States Customs Service against the work's owner, Austrian art collector and museum curator Rudolf Leopold. At the time the complaint was filed, Portrait of Wally had been hanging on a wall at the Museum of Modern Art in Manhattan, part of a celebrated exhibit of Schiele's work on loan from the Leopold Museum in Vienna. Customs officials, along with the Department of Homeland Security and the District Attorney's office in Manhattan, claimed that the painting did not belong to Leopold at all, but rather to the heirs of Lea Bondi Jaray, a onetime Viennese gallery owner, an early champion of Schiele's, and a Jewish woman who, in post-Nazi-annexed Austria, had seen her entire gallery, plus the contents of her own private collection, seized and "Aryanized" by art dealer and Nazi party member Friedrich Welz in 1939. And since Leopold didn't actually own the painting, the government argued, he shouldn't be allowed to take it with him when the MoMA exhibit closed.

Over the next 10 years, the painting and the case became causes célèbres in the art world – editorials were written, protests were organized, amicus briefs were filed, sides were chosen, friendships were lost, the law was wrangled, and, one suspects, a few cocktail parties were ruined. All the while, Portrait of Wally sat in a crate in Queens, a stunning example of early Austrian expressionism at the mercy of historical forces and political realities its creator couldn't possibly have envisioned.

Then, in the late summer of 2010, the crate was cracked open and Portrait of Wally was reborn.

Documentary filmmaker Andrew Shea was there when it happened, though he didn't know what was happening at the time. By that point, Shea, a longtime feature filmmaker and a professor in the University of Texas' Department of Radio-Television-Film, had been shooting footage for what would eventually become the documentary Portrait of Wally for more than two years. In that time he had managed to round up interviews with many of the drama's major players, including Robert Morgenthau, the former district attorney for Manhattan, who had kicked off the whole controversy when he petitioned the court to grab Portrait of Wally when it was still hanging in the MoMA. Shea had interviewed journalists, art historians, art-restitution activists, lawyers, museum officials, and government officials. He'd culled through hours of archival footage and read countless articles and legal briefings. He'd shot footage in New York and Austria. Yet he'd never actually seen Portrait of Wally.

Shea knew the various white whales his movie depended on – an interview with Leopold or someone in the Leopold family, a shot of the painting itself – were contingent upon the case coming to a close. And that had been slow in coming. It wasn't until October 2009 that a district court judge even ruled that there was enough evidence to proceed with a trial.

But then, suddenly, things begin to move quickly. I promised Shea I wouldn't give away the ending of his movie (a fair request), so I'll just say that in the late summer of 2010, things began to move fast, very fast, and Portrait of Wally, after 10 years spent wallowing away in an anonymous warehouse in an anonymous borough, was at long last freed.

On that late summer morning, Shea received a call from a contact at the Department of Homeland Security saying he should go to such-and-such a warehouse at such-and-such a time. Something important having to do with his movie was happening, the contact told him, but that was all he knew. When he got there and realized Portrait of Wally was about to be uncrated – that the event he'd dreamed about for more than two years was about to take place – he had to keep his long-bubbling excitement in check and make sure he directed his small crew to actually get the occasion on film.

"The whole thing was quite shocking," Shea recalls, a week before his documentary is set to have its Austin premiere at the Violet Crown Cinema. "I didn't know when we drove to Queens that was going to happen. I was just told to be there. So when they started opening the crate, I was trying to stay very focused on making sure we got all the key moments. I don't think I realized until much later the significance of that moment, both historically and in terms of the making of this film." 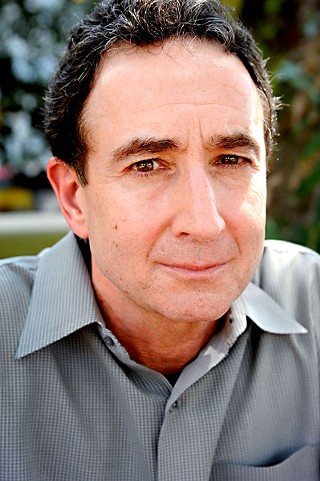 The day after she handed over her entire art collection – including Portrait of Wally – to Friedrich Welz, Lea Bondi left Austria and fled to London. Soon, the Jewish population in Vienna (estimated to be around 200,000 a decade earlier) was all but gone – expatriated, fled, imprisoned, killed.

Six years later, after World War II had ended and the Nazis no longer controlled Austria, Bondi petitioned to get her gallery and her paintings back. After seven years she had reclaimed her gallery's holdings, but was unable to retrieve the pictures that had been in her private collection, including Portrait of Wally. The Austrian restitution courts had sent Portrait of Wally to the Austrian National Gallery, mistakenly thinking it was a part of the collection of Dr. Heinrich Rieger, himself an Austrian-Jewish collector who had also been forced to sell his collection to Welz in 1939 before being deported to the Theresienstadt concentration camp, where he died.

Desperate to retrieve her paintings, Bondi enlisted the aid of her longtime colleague and fellow art collector Rudolf Leopold to help her. Leopold got Portrait of Wally (trading the museum for one of his own) but kept it for himself, hanging it at the Leopold Museum next to a self-portrait Schiele had painted on the very same day, two lovers preserved side by side forever. Bondi would never see Portrait of Wally again.

When it was discovered in 1997 that Bondi's painting was hanging on a wall at the MoMA, the resulting subpoena set off a firestorm in the New York art world. Galleries and museums in New York (including the Jewish Museum of New York) pledged support for the MoMA in its fight against the district attorney, all of them claiming that if Morgenthau won his case and Portrait of Wally was returned to the Bondi family, the era of art galleries lending works to New York museums would be over; no one, they said, would risk losing their art to American courts. The American art scene would be as good as dead.

This was stunning to many, Andrew Shea among them.

"It was depressing how many museums and galleries lined up to sign that amicus brief," Shea said. "It was a knee-jerk reaction on the part of the museums to just line up behind their colleagues instead of taking a real serious look at the issue and at the merits of the claim and the morality of the claim.

"If my film works, it works because it's asking an audience to examine whether these big art institutions should be driven by a moral imperative, not just an institutional response to these kinds of dilemmas."

In the end, many of New York's greatest cultural institutions – among them the MoMA and National Public Radio – saw their reputations blackened as a result of their response to the Portrait of Wally affair. Still, despite the outrage he feels at how those institutions (and many others) handled the situation, Shea is pleased that it placed the issue of restitution and reclamation front and center in the ongoing debate between art and morality, even if that debate came too late to help Lea Bondi.

"The charitable way of putting it is that the people at MoMA were in over their heads at the time," Shea says. "In 1999 they were not used to dealing with these kinds of claims. There was no blueprint, and a lot has changed as a result of this case. Museums are more sensitive, more diligent in researching the provenance of their collections. What Morgenthau did sent shockwaves through the international art world. People realized these works had to be scrutinized.

"What happened to Lea Bondi triggered a sense of outrage in me. But it also made it a powerful subject; it made me want to keep digging deeper."

Portrait of Wally opens in Austin on Friday, Sept. 7. See Film Listings for showtimes and review.