The Artist Will See You Now 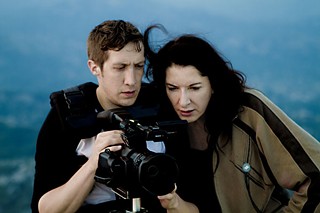 What a piece of work is Marina Abramović. Ditto this terrific film, a riveting portrait of the über-outré, Belgrade-born, 65-year-old performance artist, who is probably best known for her decades of work involving creative and provocative acts of physical self-aggression – frequently while unclothed. Matthew Akers' film, Marina Abramović: The Artist Is Present, which follows the artist as she prepared for the 2010 Museum of Modern Art retrospective of her work, is the next best thing to having been there in New York along with the artist.

You'll likely recognize Abramović from all the press that her retrospective – the first ever thrown by MoMA for a performance artist – generated at the time. It's a toss-up as to which of the pieces on view attracted the most attention: Abramović's new work or the re-performed piece that featured a naked couple standing face-to-face, only inches apart, in a narrow gallery doorway, forcing visitors wanting to play through to awkwardly invade the couples' personal space. For her new piece, "The Artist is Present," Abramović took a seat at a wooden table (later on, removed) in the middle of the museum's atrium and sat in silence for 8 to 10 hours a day for the entire 77-day retrospective. One by one, members of the audience could come forward, take a seat across from her, and silently commune with Abramović for a while. Close-ups revealed the instantaneous emotional connection that sparked between Abramović and these perfect strangers who locked onto her gaze. Like religious pilgrims, many were overcome with emotion. One young woman was moved to remove her clothes as she sat down – before being whisked away by museum guards, primed to expect anything at an exhibition like this. Klaus Biesenbach, a MoMA chief curator and longtime friend of the artist, described the performance as "a self-portrait."

Spoiler alert: One of the most moving moments of the film is when Abramović's former lover and creative collaborator, the German artist Ulay, takes his seat in front of her. After 12 years together, much of it living and performing out of a Citroën van, also on view at the exhibit, Abramović's and Ulay last performed together in 1988. That piece, "The Lovers," had them walking towards each other from opposite ends of the Great Wall of China, meeting in the middle after three months and thousands of miles, to say goodbye.

Austin Chronicle: How would you describe Marina personally? She seems so disarmingly honest and unpretentious. Is that the real her?

Matthew Akers: A hundred percent exactly as she is in the film. I was most surprised that her warmth, charm, and generosity were truly boundless. Also, her life outside of "The Artist Is Present" is totally manic. She never stops moving, working, talking. It's odd to think now that she was still for so long and that I witnessed it. She certainly doesn't sit still much, unless she's doing a performance.

AC: What do you think is the key to her success as an artist?

MA: Several things. She has energy for days. She works as hard as anyone else that's made something of themselves. She is tireless in her effort to bring performance into the mainstream. She listens to good advice. She has good ideas.

AC: How does she answer the question I'm sure she's always asked – namely, how is what she does art?

MA: She doesn't. She leaves that for others to decide. She's pretty confident that people will figure out how self-evident the answer to that question really is. I guess that's the reason she was so utterly unfazed by my initial skepticism [when deciding whether to make the film].

AC: How did you come to the Marina project?

MA: The producer of the film – Jeff Dupre – and I have collaborated for a number of years on long-format documentary series for PBS. Jeff informed me that he had met Marina at a dinner party and had found her extremely charming. A few weeks later he asked me if I would be interested in making a film about her. At first I was reluctant. Having some knowledge of the ephemeral nature of performance art, I knew it would be a potentially insurmountable challenge. ... The very first day, I met Marina and expressed my skepticism. She seemed utterly unfazed. I took her fearlessness as a very good sign. Additionally, she assured me that I would have total and unfettered access. On top of all of that, she was as charming as Jeff described. From that moment on I was all in.

AC: Did your concept for the film evolve during production?

MA: The concept did evolve. Initially I did not want to do any interviews at all. Rather, I was interested in making an observational film in the style of Frederick Wiseman – hoping that all would be revealed naturally. At a certain point I was persuaded that while that might be a good approach, because of the lack of funding, we really wouldn't have the luxury of being able to properly comb through all the footage I was amassing. ... Lastly, the concepts that Marina was dealing with, not only in her new performance, but throughout her career, are quite dense and difficult to grasp without explanation.

AC: I must ask, did you arrange for Ulay to appear or did that just happen serendipitously, a gift from the filmmaking gods?

MA: Filmmaking gods, for sure! During the first week I filmed with her, she told me he was coming to town for a visit and that they hadn't spent any meaningful time together for over two decades. I immediately asked her to contact him on my behalf and find out if, before they met for the first time, I could interview him. Amazingly, he agreed – and the rest is history.

AC: How about the appearance of James Franco in the audience and his sitting with Marina?

MA: Klaus [Biesenbach] introduced James to Marina the year before the retrospective. In turn, she introduced me to him. He was getting a degree at NYU and decided to write his thesis paper on performance art, specifically Marina. ... He showed up to sit with Marina on a day I happened to be there.