World Cinema takes a swing at the police procedural 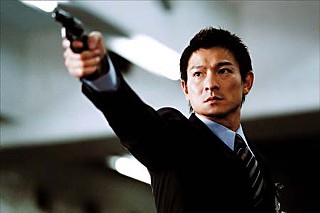 I don't know if I'm smart enough to float a workable theory about the correlation between America's off-the-charts incarceration numbers and our viewership's voracious appetite for police procedurals. But the hankering for cops and robbers is undeniable: It's made those grim, gritty wonders The Wire and Homicide: Life on the Street critical darlings slash cult obsessions and turned the workmanlike Law & Order and CSI franchises into Nielsen juggernauts. But does that hunger for policing translate to the international stage? And what if the cops-and-robbers caper actually looks more like ... a family melodrama?

The Austin Film Society's latest Essential Cinema series – a compact, terrific run of four international detective films – takes on hard-boiled's tender spots. Series starter Polisse, a Cannes Jury Prize winner, opened in New York and L.A. in mid-May, but there's no sign yet of a theatrical run in Austin, which means this may be your only crack at one of the most electrifying films of the year. The whiplash-pacing moves doubly so with subtitles, and it takes a while to catch the rhythm and place these Child Protection Unit officers with their particular personal calamities (see: drinking, brawling, bulimia, long looks at a comely partner, et al.). The CPU's work, by and large, involves the sundering of families – they regularly scoop abused children out of damaged homes and try to find them safe havens – and the cops take their work home with them. (One cop, played by the rapper Joeystarr, has a clamped-heart scene in which he coaches his toddler daughter from a deliberate arm's length to bathe herself; he's too ruined by his day job, tangling with molesters, to be unself-consciously hands-on with his own child.) The cases here have no through-line, no puzzle-logic plottings; the emphasis is on the mental ups and downs of the officers as they react to whatever's thrown at them. Their giddy, liquor-loosed dancing after a case ends well marks the movie's high point, and their lows – so many lows, in a film that director/co-writer/co-star Maïwenn based on real-life testimonials of abuse and neglect – threaten to gut the lot. It's no surprise that the cops' home lives are a mess: Their truer family is the one that goes into battle every day with them at the office.

The theme of family – the one you inherit biologically versus the one you forge professionally – recurs throughout the series. It's there in Once Upon a Time in Anatolia, which tracks a search team's efforts to uncover a dead body in the Turkish countryside. How the search party came to be has everything to do with family trauma, and how that body got there to begin with – well, that comes down to family, too. James Gray's underrated, operatic, Eighties-set drama We Own the Night (which takes its name from an NYPD motto) puts the conflict front and center, pitting a problem child with mafia connections, Bobby (played by Joaquin Phoenix), against his go-getter brother, Joseph (Mark Wahlberg), a fast-rising star in the Street Crimes Unit. While Joseph calls his fellow officers "brothers," Bobby thinks of his connected boss as a surrogate father, setting the stage for a tribalist showdown. Somebody on some side of the law will have to betray his people; it's the same inner crisis corroding the leads of Infernal Affairs, the 2002 Hong Kong thriller that inspired Martin Scorsese's The Departed. This is a movie about moles working different angles (it stars HK superstars Tony Leung Chiu Wai, a Wong Kar-wai regular, and House of Flying Daggers' Andy Lau). As young men, they were asked to choose a side, and then pretend to play for the other team. And so the straight-laced cadet goes deep undercover to infiltrate the Triad, the baby gangster embeds himself in law enforcement, and the hard and fast line between family and foe becomes tragically confused for both.

Officers of Uncertainty: The Policier Legacy in Contemporary International Cinema