A Raunchy Comedy With Sacred Cows in Its Sights 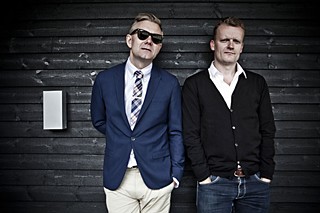 "The thing we noticed with the Austin audience, and American audiences in general, is that the whole homosexual thing, the gay thing? It works better over here." So says Danish comedian/actor Casper Christensen on Drafthouse Films' inscrutably bizarre, irredeemably distasteful, and absolutely genius Klown. Based on an obscure – to stateside filmgoers, at least – 60-episode Danish television show that follows the misadventures of a pair of socially clueless best friends, Casper (Christensen) and Frank (Frank Hvam), as they embark on a disastrous guys-only weekend of utter debauch and comic self-discovery dubbed the "Tour de Pussy." But, back to the whole gay thing.

"In Denmark," continues Christensen, "it's the idea of man-flirting that's funny. The stupid idea that you can get whatever you want by flirting with another man is funny. But the whole scene where Casper refuses to put on a life vest [via man-flirting], or the scene where Frank tries to man-flirt? It's hilarious over here. The audience loves it so much more and it gets such a stronger reaction in America."

"And then there's the whole scene where Frank runs away from home," pipes in Hvam, "when there's a home robbery? That also plays better and gets bigger laughs in America. Of course, he's also a coward in Denmark, but in Denmark the presumption is not that the robbers are going to harm the child. They're probably unarmed and most robberies are not that violent in Denmark. [In America], if you have a home robbery, they are probably armed and you might be raped and killed."

Christensen: "Exactly. In Denmark the audience is more like, 'I hope they don't wake up the kid because then he'll be scared and cry.' And that's the worst thing that could happen. And, really, that's bad enough, you know?"

The intricacies of cross-cultural home invasion comedy aside, Klown, which for the record was produced by Louise Vesth (Melancholia, Dancer in the Dark) via Lars von Trier's Zentropa Entertainments, is, in its own wonderfully sick and wrong way, a portrait of hapless male egos colliding with the planet-sized realities of adulthood. In fact, think of it as Melancholia on an ecstasy-and-shroom cocktail, but, you know, minus the apocalyptic angst. It's a comedy first and foremost, but it makes you choke on some of the gags. Which, of course, only doubles the taboo-shattering merriment.

So much so that Warner Bros. announced that they had acquired remake rights last April and attached director Todd Phillips (The Hangover series) and Danny McBride (Eastbound & Down). Obviously it remains to be seen if the raunchily inappropriate yuks will translate into boffo box office bucks, but our guess is yeah, almost certainly. And let's not forget that there's a wealth of material from the original Klovn television series to draw from.

"[The original show] featured the same two characters," explains Christensen, who adapted the show to film with his costar Hvam and director Mikkel Nørgaard. "It had the same tone, the same style of comedy. The greatest difference between the show and the movie is that an episode of the show could be about a pen that is missing, which obviously isn't going work for a feature-length film. The movie allowed us to go with bigger emotions, a bigger story."

"We do a little bit more with the characters in the movie," says Hvam. "Casper is getting raped in the movie and we would not do that on the television show, but that's only because with the show, we have to have the characters back in shape for the next episode. So we kind of needed to end on status quo the whole time. It's smaller, observational humor, but at the same time we always wanted to have Frank always be this socially handicapped character who does the wrong things for the right reasons. We did have a taboo list of things you cannot do comedy on, and we ended up going through that list a couple of times."

What sort of topics are comedy taboos in Denmark?

Hvam: "We worked on everything from trying to do comedy on cancer, Down syndrome, cannibalism, racial issues ..."

Muslim extremists? After all, neighboring Dutch film director Theo van Gogh was famously murdered by a Dutch-Moroccan extremist in 2004.

"Oh yeah," Hvam continues. "We had an episode in which Frank accidentally feeds a Muslim child some pork."

Christensen: "That one we wrote a couple of months before the cartoon crisis when the Jyllands-Posten, a Danish newspaper, published a series of cartoons with Muhammad prominently featured. That was huge, and it was basically the same story we had written from Klovn, but we got there first. Thankfully, you know, there was no fatwa decreed for us and we're still alive."