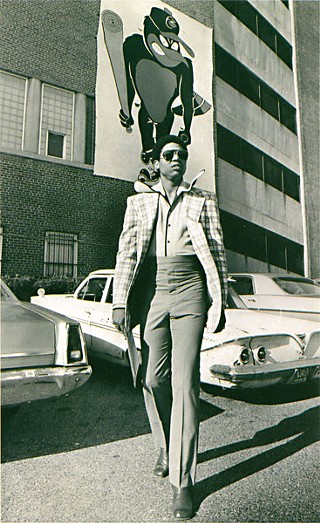 Is LSD a performance-enhancing drug? Maybe for a musician, but you wouldn't think so for a Major League Baseball pitcher. On June 12, 1970, Pittsburgh Pirates starter Dock Ellis, mistakenly thinking he had the day off, dropped acid. He took to the mound high as hell and proceeded to throw a no-hitter while experiencing wild hallucinations. It's an (in)famous milestone in baseball lore, but even nonsports fans are familiar with the story from James Blagden's funny, trippy animated short "Dock Ellis and the LSD No-No," which has more than 2 million hits on YouTube. Now local filmmaking crew Baseball Iconoclasts is producing the first-ever feature-length film about the extraordinary and ultimately inspiring life of Dock Ellis.

During his baseball career Ellis was known as much for his unusual behavior and strong beliefs as his excellent play. At his peak in 1971, he was an All-Star and won a World Series ring while posting impressive stats: 19-9, 3.06 ERA, 11 complete games. Ellis and Vida Blue were the first two black pitchers to start against each other in an All-Star Game, and Jackie Robinson acknowledged Ellis' support of black ballplayers and outspokenness on racial issues. He was a Seventies-era fashion trendsetter who drove flashy cars and lived the high life. He was also a drug addict and alcoholic. Following his retirement, Ellis cleaned up his act, was candid about his alcohol and amphetamines addiction, and spent the remainder of his life as a drug counselor.

Director Jeffrey Radice and producers Mike Blizzard and Chris Cortez began work on No No: A Dockumentary in 2010, two years after Ellis' death from liver disease. (Full disclosure: Austin Chronicle Editor-in-Chief Louis Black has advised on the project.) The production team has logged more than 50 hours of interviews with those closest to the legend, including his friends and family, former teammates, and people he counseled. Director Radice relayed via email his inspiration for taking on the project: "Dock's career as a baseball player was fascinating. He was flashy, outspoken, and outside the norm. His career after baseball as a drug counselor was unexpected, yet completely in character. Dock Ellis is this larger-than-life individual who lives up to his billing." On the timing of the film, Radice says, "After he died in 2008, I couldn't shake the sorrow and regret that I hadn't moved sooner to tell his story. Eventually, I realized the film could go on after his death as a form of elegy. To me, what makes him a great man is the consistent honesty that he had over the course of his life and that he surrounded himself with other great people."

A Kickstarter campaign is running until Tuesday, July 17, to help fund postproduction on No No: A Dockumentary. For details, and to see the trailer, visit www.nonoadockumentary.com.

A Wild Pitch of a Life
No No: A Dockumentary chronicles the legendary life of pitcher Dock Ellis