Man With a Movie To Score

Justin Sherburn sounds off on an avant-garde, Soviet silent 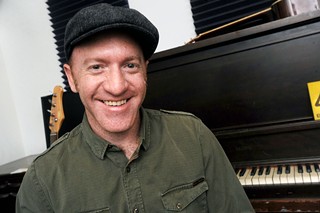 In a small, crowded house at the end of a long street in Montopolis, Justin Sherburn, a keyboardist with the indie rock band Okkervil River, is preparing a group of five musicians for a run-through of a score he's written for the 1929 silent film Man With a Movie Camera. The group, made up of a classically trained percussionist, a bass player, two violinists, and a violist, will accompany the film this Sunday and Wednesday, July 8 and 11, at the Alamo Drafthouse South Lamar as part of the Silent Movie Live Score series.

Directed by Dziga Vertov (born Denis Abramovich Kaufman, making him perhaps the first Jewish man to change his name to get ahead in the movie business, outpacing Kirk Douglas and Woody Allen by decades), Man With a Movie Camera is a cornerstone of Russian avant-garde cinema, a plot-free documentary-of-sorts about the developing relationship between humans and machinery in 1920s Soviet Union that featured all kinds of new cinematic techniques – split screens, freeze-frames, backward projection – and a self-reflexive approach to the art of moviemaking. Based around the concept of filming a cameraman filming the world, it may be the first metafilm – the first film within a film.

"Unlike a lot of the movies I considered scoring, Man With a Movie Camera feels contemporary," Sherburn says. "I love Buster Keaton and Charlie Chaplin, but their movies are corny and campy; they're for a different time. But Movie Camera is as relevant today as it was when Vertov made it. Sure, it was a piece of political propaganda, but remove it from its context and it's just this document of people living their lives."

Sherburn presses a button on his laptop, and the film is projected onto a bare wall in his living room. He holds down an ominous low note on a keyboard while bassist Lindsay Greene produces warbling electronic sounds from a handmade cigar-box synthesizer. The box turns electricity into sound via a primitive oscillator made from parts purchased at Radio Shack – the perfect instrument, Sherburn says, for a movie about the virtues of mechanical progress and its relationship to artistic creation.

The director's rebelliousness is evident in the film's first shot: In defiance of the laws of physical reality, the cameraman of the title, movie camera in hand, climbs up onto the top of an enormous movie camera to survey the city of Odessa, the result of a clever bit of splicing and image manipulation. Man With a Movie Camera

Sherburn's band responds with its own bit of brazenness, a four-on-the-floor rock beat behind rhythmic pizzicato strings, rolling drum fills, and driving guitar chords. Onscreen, the cameraman loads his film into a projector, a theatre fills with patrons, and rows of stop-motion seats fold down of their own volition, followed by images of a city coming to life – a woman dresses, trolleys roll through city streets, factories spew smoke into the sky.

"The pace of the movie has so much forward momentum – it feels like it constantly wants to be moving," Sherburn says about his decision to use driving rock rhythms to accompany a movie from the pre-rock 1920s. "The factory is a big part of their lives; machinery working is a huge part of their lives. People use repetitive motions: typing, manipulating machines, riding trains. So I felt like repetition in the music would work well."

After an exhilarating sequence in which the band bulls through another looping rock melody to accompany footage of a horse and buggy racing through city streets, the movie suddenly settles into a series of still photographs, interspersed with footage of Vertov's wife and co-editor Yelizaveta Svilova editing the individual shots into moving images. The sequence is both sentimental and self-reflexive, a look behind the curtain at the machinery and labor of filmmaking and a pensive appreciation of the images that labor produces. It's simultaneously art and an explanation of the process of making art: avant-garde with emotion. Sherburn scores the sequence with minor piano chords and a weeping violin melody called "Birth and Death."

"The whole movie is nostalgic, but this moment mimics when you pick up an old photograph, that immediate nostalgia for the beauty of the past," Sherburn says. "At the same time, [Vertov and his collaborators] were incredibly egotistical. They felt like they were changing people's minds with their work. So they want to show the process. That's what the movie is about. They were fascinated by their own power. Anyone who documents their own process has got to be a little narcissistic."

Sherburn and his group are scheduled to rehearse once more before their performances at the Alamo. After that, the composer hopes to take Man With a Movie Camera on the road. Before that can happen though, the group has to learn how to play the entire Movie Camera score – the film is just over an hour long – without breaks.

Things go well enough for the first 20 minutes of their run-through. Then, while navigating the delicate arpeggios of "Birth and Death," Sherburn hits a sour note on the keyboard. Rather than rewind the video and try again, he smiles sheepishly at the other musicians and plays on, just another human being in imperfect dialogue with technology.

Man With a Movie Camera with live accompaniment will screen Sunday, July 8, and Wednesday, July 11, at the Alamo Drafthouse South Lamar. See www.drafthouse.com/austin for ticket info.

You can stream a track or download the whole album of Justin Sherburn's Man With a Movie Camera score at www.montopolismusic.com.