Lynn Shelton on the creative process behind 'Your Sister's Sister'

When I think of how movies get made, here's what I imagine:

First, a screenwriter, either fresh-faced and wiry or aged and bloated with whiskey, slaves away for months at a typewriter in a tiny room somewhere, sweating out a script that takes years from his life while bringing him little joy. Next, a producer takes that script, into which the screenwriter has poured his soul, and gives it to another screenwriter to rewrite, demanding he change it from a poignant social drama to, say, a romantic comedy or a teenage dance-off. The producer then hires a director with a record of box office success, auditions dozens of actors and actresses in the hopes of casting big names with records of box office success or next-big-things, and assembles them for six months on a set filled with trailers where everyone retreats alone after each take to complain to their agents about their pay rates.

The actors and the director all make a show of getting along, of having "chemistry," but no three of them are ever in one place at the same time, and when they are, chances are good an argument will erupt about the "creative direction" of the film. The director shoots the movie out of order for budgetary reasons and makes his actors do take after take of each scene. Once the shoot is over, everyone vanishes to their own corners of Los Angeles, leaving the original screenwriter alone in the back of an editing room on a studio lot watching ineffectually as the poignant social drama he wrote all those years ago is cut up into tiny pieces easy enough for a 14-year-old boy to digest. Later, the actors are replaced by CGI monkeys.

Writer/director Lynn Shelton, who has made four features, with a fifth on the way, ignores these more bombastic tendencies of the Hollywood assembly line and uses words like "collaboration" and "engagement" and "experimentation" with a straight face. Anyway, it sounded like a straight face. I was only able to speak to her on the phone, and only for 15 minutes – merely one brief conversation in a Tuesday full of them for a filmmaker whose latest, Your Sister's Sister, was shot on a tiny budget that would only justify a cell phone junket.

Your Sister's Sister is a beautifully acted exercise in cinematic intimacy and naturalism built around a wisp of a story. On the one-year anniversary of his brother's death, a thirtysomething slacker named Jack is sent by his best friend, Iris, to her father's cabin on the San Juan Islands off the coast of Seattle to get his head straight. There he meets Iris' sister Hannah, who is herself mourning the death of a long romantic relationship. After Jack and Hannah spend a drunken night together, Iris shows up, injecting emotional depth into their hastily created world of booze, sex, and other forms of heart-numbing indulgence. Shelton believes the film could only have worked if the actors involved were able to communicate the kind of closeness that can't be faked.

"I don't know how to audition actors," she tells me. "It wouldn't make sense for me and how I make movies, which requires a lot of collaboration. Casting is a very instinctive thing in terms of who I want to invite to be a part of this process and who I think can create that sense of closeness."

That process is similar to, yet distinct from, the ones used by such truth-seeking indie film writer/directors as John Cassavetes and Mike Leigh, whose movies value intimacy over everything else. Leigh workshops his actors for months, building a script from their improvisations. Once that script has been written, however, it's written, and the actors are expected to stick to it on set. 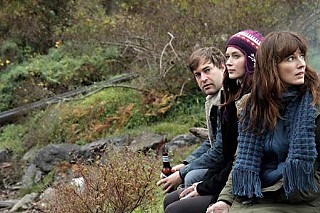 For Shelton, meanwhile, the process of collaboration and improvisation extends throughout the shoot. It's a process the poet, painter, photographer, and actress first stumbled upon while she was making her first feature, We Go Way Back, about a 23-year-old woman failing to live up to the hopes of her 13-year-old self. Shelton wrote the script for that film conventionally, but for one scene set at a party, she allowed the actors to improvise.

"The improvisation in that scene brought an electricity to the whole movie," she says. "Even as we were filming it, I realized that was the approach I wanted to take in order to get the kind of naturalism I was looking for."

Her next movie, My Effortless Brilliance, was an "experiment," she says, to see if she could build an entire film around actors she simply wanted to work with and who would help her build the storyline and the dialogue through improvisation. It was the only way Shelton could think of to get the kind of interpersonal intimacy she was looking for. "I set a high bar for naturalism," she says. When the experiments of My Effortless Brilliance actually coalesced into a movie – and won its director the Someone to Watch Award at the 2009 Independent Spirit Awards – Shelton knew she had found her method. Her next film, Humpday, which brought her worldwide acclaim and was nominated for the Grand Jury Prize at Sundance, continued the process of actors collaborating their way through a movie built around a loose framework of a story.

"My actors help develop their characters with me," Shelton says, "to the point that they're often given creative consultant credits. They help me create the script by getting deeper and deeper into their characters. They improvise on set, and then it all comes together in the editing room, where I have to go back through all of this amazing footage and find the direction the movie should go in."

Your Sister's Sister is both a continuation of that collaborative process and a big step up in terms of collaborators. Along with Humpday star and indie film regular Mark Duplass, the movie stars Emily Blunt (The Five-Year Engagement, The Devil Wears Prada) and Rosemarie DeWitt (Rachel from Rachel Getting Married), actresses whose Hollywood careers generally don't afford them the time or creative opportunities that lead to the kind of intimacy Shelton demands. Convinced that the act of filmmaking is an artistic experience valuable for its own sake, Shelton convinced Blunt to do Your Sister's Sister by talking more about the creative process they'd be engaging in together rather than the product they'd be creating.

"Emily often feels rejected creatively on the movies she shoots," Shelton says. "When she goes to the director on one of these big Hollywood movies with an idea for the character or a scene, they pat her on the head, like she's adorable and that's it. Actors like feeling validated, and I love working with actors in a way that allows for that. When I first started talking to Emily about doing Your Sister's Sister, I spoke mainly about how much fun the shoot was going to be: 'I'm going to kidnap you for two weeks, take you to this beautiful place where you're going to work and hang out with some of the coolest people in the world. And even if the movie doesn't work out, you will have had a great time.'"

"Everything about making movies is designed to frustrate actors creatively," Shelton continues. "Doing 40 takes of every scene, shooting the movie out of order. It all makes for an environment where actors don't feel artistically involved."

For Your Sister's Sister, Shelton took the next step in her own creative process: talking with Blunt and Duplass for months before shooting began (DeWitt didn't join the cast until a few days before the shoot), developing their characters, illuminating their backgrounds, and figuring out how their two characters understand each other and interact. By the time shooting began, Shelton had what she calls a "bible of back story" and 70 pages of dialogue that both gave the story its structure and freed up the actors to move around the story, breathing life into it.

"That gave the actors, especially Emily and Rosemarie, a security blanket," Shelton says. From under that blanket, they were free to move where they would. Shelton estimates the finished film is 80% improvised. It's also far and away her best movie yet.

"Despite the years I spent acting and writing and painting, I didn't come into my own as an artist until I got involved with the collaboration that goes on in feature films," Shelton says. "Your Sister's Sister is all about that collaboration, and about getting that sense of documentary naturalism that make movies such intimate artistic experiences."