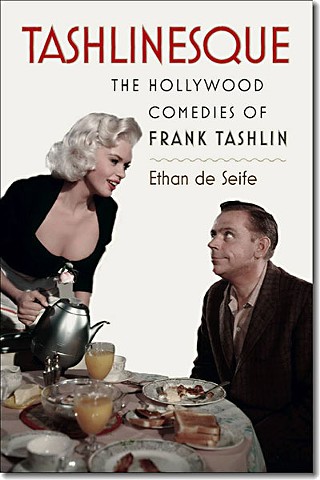 
One of the few Hollywood directors to ever make the transition from animation to live-action filmmaking, Frank Tashlin's career is staggering in its scope: He was a comic-book artist for the Los Angeles Times, an animator at Warner Bros. and Disney, a screenwriter, director and producer at Fox, Columbia, and Paramount, and a children's book author. Though not a household name, many Americans became acquainted with his many Porky Pig cartoons while still taking their meals in high chairs. Just about anybody over 25 could pick Tashlin's most frequent human collaborators – Bob Hope, Jerry Lewis, and Jayne Mansfield – out of a lineup, and no history of rock & roll would be complete without a reference to 1956's The Girl Can't Help It.

Ethan de Seife, a film studies professor at Hofstra University, braids together these pop cultural strands in his book Tashlinesque: The Hollywood Comedies of Frank Tashlin. The author describes Tashlin as a genre master languishing in a cultural ghetto, misunderstood even by experts, and uses the Jersey-born filmmaker's career as a lens for examining a number of alluring topics: the "Golden Age" of Hollywood animation, genre conventions of American movie comedy, and censorship strictures of the Production Code.

Jean-Luc Godard coined the term "Tashlinesque" in his ecstatic Cahiers du Cinéma review of Tashlin's 1956 Jerry Lewis/Dean Martin movie Hollywood or Bust. Since then, film critics have used the word as a shorthand way to describe a garish, zany visual style, an emphasis on caricature, and an all-around "cartoony" mise-en-scène.

Tashlinesque aims to stamp out this critical cliché through rigorous textual analysis. Films like Son of Paleface (1952) and Will Success Spoil Rock Hunter? (1957), de Seife argues, are not cartoon-derivative. Rather, Tashlin's live-action features, like his animated shorts, are equal heirs to the vaudeville traditions of escalating visual gags, sexual humor, social satire, and "diegetic rupture," or breaking the fourth wall.

De Seife finds himself in an awkward position familiar to anybody who's ever written an appreciation on an obscure subject. It's exceedingly difficult to edify the uninitiated without outraging the experts, or to argue with the experts without putting the general public to sleep. For having the bravery of entering uncharted waters, the author is likely to be damned by faint praise by both sides.

With that caveat, de Seife's clear, conversational, jargon-free prose style makes this scholarly study accessible for nonacademic readers, and between the stretches of textual analysis are vivid passages of historical narrative. His chapter on the operations and house style of the Warner Bros. animation department is particularly rich, as are his insightful dissections of star personae: Bob Hope's "semi-gayness," Jerry Lewis' infamous image overhaul after his split with Dean Martin.

However, it's disappointing that de Seife is so light on biographical detail and psychological conjecture about his subject. The most compelling pieces of the story are quirks the author mentions only in passing. Such as: Tashlin's role in the creation of the bizarre Private Snafu series of World War II propaganda cartoons (Dr. Seuss meets smutted-up Looney Tunes in wartime), the recurring images of nuclear apocalypse in Tashlin's most personal work (a children's book called The World That Isn't, the stop-motion animated, evangelical short "The Way of Peace"), the friction between Lewis and Tashlin in the wake of turkeys like The Geisha Boy, and finally, the filmmaker's condition as a compulsive drifter. De Seife counts 38 times that Tashlin moved from one employer to another in his studio career.

The book is well-illustrated with film stills but contains not a single picture of Mr. Tashlin. Where is he? Who is he? How did his personality manifest itself in his work? Reading de Seife, as if watching a movie from the front row, we get an eyeful, but come away feeling like we missed the panorama.