Of the adjectives reviewers have frequently applied to his new film, Damsels in Distress – I threw out "arch," "daffy," "winking," "wry" – Whit Stillman prefers "daffy." "That's terrific. We should put that in the ad," he says, writing the word in large letters on a notepad.

The distress of Stillman's light campus comedy is, in fact, rather serious. Whereas mental illness (real or imagined) is a peripheral subject in his other films, Metropolitan (1990), Barcelona (1994) and The Last Days of Disco (1998), here it is at the forefront. The heroine, Violet (Greta Gerwig), ringleader of a group of do-gooders at Seven Oaks University, is obsessive-compulsive and prone to depression. Cast aside by frat boy Frank, she quickly transitions from being the chairwoman of the suicide-prevention committee to the subject of a suicide watch. "Daffy" applies to the sensory world of Damsels, filtered through the troubled mind of its heroine as she careens from light to dark in a psychological tailspin. Yet it is her wistful optimism that makes Violet Stillman-esque: Her suggested cures for sadness include better-smelling soap and a dance craze she hopes to launch called the Sambola.

I spoke to Stillman on Monday in Downtown Austin. Now more than six weeks into his Damsels press tour, he didn't seem weary at all. Unruffled, elegant, and engaging as the reputation that precedes him, Stillman seems to have inexhaustible reserves of quality anecdotes. Who knew, for instance, that his great-great-grandfather, the sea captain and entrepreneur Charles Stillman, founded the city of Brownsville in 1848? Charles, or "Don Carlos," had interests in land, banks, railroads, and shipping in South Texas. One of his partners was Richard King of King Ranch. "Unfortunately, I think they sold the last of their land to King right before the oil boom, at ten cents an acre or something," the filmmaker said.

Demonstrating the Hook 'em Horns hand gesture ("Am I doing it right?"), Stillman praised the Texas capital and said he's been contemplating a move to Austin. We chatted about Texas, Damsels, and frat boys until he was whisked away to his next interview.

Austin Chronicle: I've heard the country & western dance hall scenes in Damsels were inspired by your visits to Austin.

Whit Stillman: Yes, when I was down here in the Nineties for the Austin Film Festival, there seemed to be a lot of that going on, and I really enjoyed it. It's a kind of nightlife [my generation] missed. Those places are better-lit, more hospitable, not trying to be cool, sort of integrated into the life of the evening rather than the very late-night sort of snotty nightclub thing.

AC: At the beginning of the film, the damsels go to a frat party. It's pretty tame. I think some viewers down here will be surprised by your sympathy for these frat boy characters.

WS: It seemed to go with the territory that there would be sort of a male equivalent, a corresponding world, to that of our female characters. It's mostly based on what I saw when I was working for Indiana University in the late Seventies. I saw all the Greeks and the non-Greeks, and the hostility between the two groups. Animal House came out while I was there. And then immediately I saw all these toga parties happening.

AC: What other experiences have you had with fraternities?

WS: At Harvard, the fraternities gave up their Greek charters ages ago, so they're just called "clubs." I joined one, the Fly Club. To be able to pay the dues, I got a job as a short-order cook at the lunch counter at night on Thursday and Friday nights.

WS: They didn't do hazing. The Fly Club was sort of radical and cool and specialized in foreigners, so there were people from Liberia, Latin America, France. That was kind of a positive thing. What wasn't positive was all the tensions in the university. It was a very radical time. I had this experience where I felt I was on the left, very progressive, but I kept being attracted by things that were old-fashioned. The tension there probably caused me too much anxiety.

AC: In The Last Days of Disco, Chloë Sevigny's character, Alice, is described as an "aesthetic reactionary." I liked that. Would you describe yourself that way?

WS: I would try not to because it would get me in trouble, but it's kind of true, isn't it? The word "reactionary" is not a good word, but there's so much retro stuff in all that I do. So yes, I am very interested in the past and past forms. I think we let go of past forms too quickly. There's an impetus to change the vessels of our expression, but we shouldn't. There's so much life in old forms.

WS: Dancing, tap or otherwise, is highly recommended. I hope you'll spread the word about the Sambola!

Damsels in Distress opens in Austin this Friday. See Film Listings for showtimes and review. 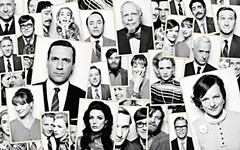