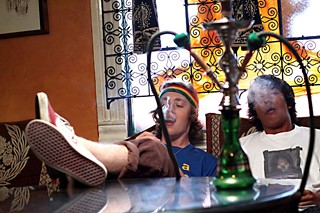 If it weren't for bad weather and bad traffic, high school stoner comedy 4:20 Austin High would never have happened. In 2009, producer and star Mike Wilson was trying to get to the Austin City Limits Music Festival. "I was trapped in traffic outside of Austin High School. I wasn't going anywhere for a while, and my mind started wandering. I looked at the sign and thought, 'Austin High. That'd be a great name for a stoner comedy.'" Warning: Wilson and Austin ISD would like to point out that the movie's hazy and wholly fictional Lady Bird High School is in no way based on the real Austin High. When the script started causing ructions in 2010, Wilson says, "The school board was very diplomatic and said that we consider entertainment to be entertainment."

Austin High, which is directed by Alan Deutsch, lit up screens at the 2011 Austin Film Festival. Now renamed 4:20 Austin High, it blazes and lazes its way onto VOD, iTunes, and Netflix on April 20. (There will also be select local screenings; see Special Screenings.) Wilson hopes it will sit alongside other smoky Austin classics like Slacker and Dazed and Confused. While he was inspired by that duo, he wanted to do more than just mimic them. "Those films are really old now," he said. "No one's done a film about the Austin that I know. So I started thinking about all the wonderful things that could represent contemporary Austin and what people love about it."

A native son of Shreveport, La., Wilson made the great trek to Austin via Dallas as part of a heavy-hitting career in the video game industry. He also dabbled in indie movies, acting in a handful of short films and earning his first producer credit for 2005's Burning Man: Beyond Black Rock. Even though he was not looking for another film project, by the time he had cleared that rough patch of traffic, he already had a rough idea of a cinematic Austin where "everyone is like, 'Oh, I do this in the daytime, but I play banjo on the steps of Güerro's every Wednesday night.'" By the time he left ACL, he and his friends had already sketched out a script about pedicabs, bar bands, Hippie Hollow, and a lot of weed. "The idea, the basic plotline, and the green light all came within about 20 minutes," Wilson says. He even got a financial backer at an impromptu pitch meeting. "Of course, I let the guy off the hook 20 times," he adds. After all, this isn't just a run-of-the-mill, easy-to-deal stoner comedy: While Wilson wanted to make people laugh, he still wanted to comment on these strange days, when "Keep Austin Weird" is being used to sell the very condos that many feel make Austin less weird. For Wilson, that art vs. investment battle "is interesting not because it's in Austin but because it's happening all over the world all of the time."

But if Austin's famous for anything, it's filmmakers who never finish a movie: So much so that the script crams in such a failed figure. But Wilson had Kirk Johnson and Will Elliott, aka comedy shorts creators Beef & Sage, to make sure the Zilker Park pitch didn't become a pipe dream. Calling them "clearly amazingly talented," Wilson says, "If I didn't have them around and know how terribly funny and hardworking they are, I never would have attempted such a feat." They helped him form the initial, sprawling concept into something filmable, and came back in for the final edit. They still kept to the screwball tradition of rabbit hole subplots, but it's a lot leaner than the original budget-busting draft with its 55 speaking roles and 35 locations. Wilson says, "The next film will have four characters and a house."