We Are Most Amused 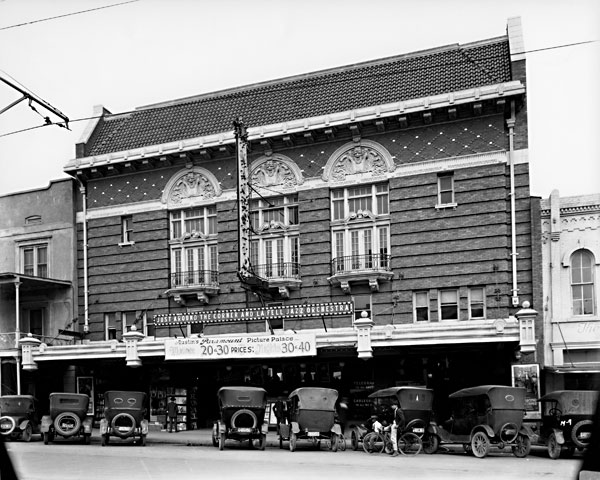 The Paramount Theatre on Congress Avenue began its life in 1915 as the Majestic, built for such vaudeville acts as the Marx Brothers and theatrical productions. The site had previously been Sam Houston's office and the War Department of the Republic of Texas, and later the Avenue Hotel. It is not only a city landmark and state landmark, but is also listed with the National Register of Historic Places.

The first motion picture screening in Austin took place in 1896, a scant 31 years after the last shots of the Civil War died out. Turn-of-the-century prosperity mixed with cinematic advances, and by the early 1900s, these storefront theatres, picture palaces, amusement houses, and nickelodeons lined Congress Avenue and Sixth Street by the dozens.

Michael Miller, manager of the Austin History Center, points out the often-transient nature of these businesses, noting that the lifespan of a nickelodeon "might be 18 months," but that by the Forties and Fifties, Downtown Austin boasted a number of first-run movie theatres. "Families came Downtown, and if you didn't like what you saw at one place, you walked across the street to another theatre."

The black-and-white images need no silver screen to tell their stories as illustrated at the Austin History Center's exhibit "The First Picture Shows" (running March 20-Aug. 19) by hundreds of historic photographs, papers, architectural drawings, and other documents. These movie houses were modern temples, often Roman or Greek in inspiration, grand by design to frame the hundreds of films Hollywood churned out for the ever-eager public. Even the names suggested a kind of privilege to enter their space: What we now know as the Paramount Theatre was originally the Majestic.

The exhibit's opening reception on Tues­day, April 3 features a panel discussion. Speakers will include Jim Maloy, a retired projectionist in Austin's theatres for over 40 years; the Paramount Theatre's current veteran projectionist John Stewart; and Jay Podolnick, whose family founded the Trans Texas Theater Co. and whose grandfather, Louis Novy, started in the theatre business in 1917 and probably never imagined streaming movies on a handheld device.