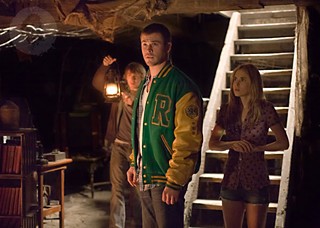 "It's not like we set out to make something audacious, you know?" says The Cabin in the Woods director and co-writer Drew Goddard via phone. "I think we just love horror."

You've seen the creepy, enigmatic one-sheet; you've heard the whispered rumors. Lensed way back in 2009, the victim of distributor woes, and only now getting its well-deserved release, Joss Whedon and Goddard's epic head trip/mash note/critique of the modern American horror film is finally having its world premiere as the 2012 South by Southwest Film Festival's opening night film. Was it worth the wait? Do teenagers die in the woods?

The Cabin in the Woods: It's a meta-metaphorical lament configuration (Hellraiser's infernal Rubik's Cube o' doom) of multilayered horror film deconstruction geared for maximum impact on not only die-hard Famous Monsters of Filmland and Fangoria fans of all ages, but also the much-coveted teenage market. Some of those teens, whose cinematic equivalents Joe Bob Briggs once so succinctly dubbed "Spam in a cabin" vis-à-vis Eighties slasher films, are going to leave the theatre inspired, possibly to the point of forgetting to make out with their hookups before the drop-off. Others, almost certainly, will exit puzzling "WTF?"

And that's a good thing. Every now and then, genre cinema needs someone to come along and rip its head off, slit its belly, and give the audience (and Hollywood) a good look at the naked, fathomable gears inside. Sometimes, you need to pay attention to the man behind the curtain, if only to reassure yourself that somebody is running the thing. That's a notion worth paying attention to while waiting for the Paramount Theatre's curtain to go up, because the real question here is how to talk about The Cabin in the Woods without actually giving anything away.

That's a tough skull to crack because the entire film, virtually from the first frame to the final credits, is one behemoth of a spoiler, recursive and inlaid with so many genre references that even discussing the basic storyline is going to lessen the film's impact. It's a subversive piece of work, cunningly crafted with a quirky, transgressive sense of the absurd that borders on the Pynchon-esque. But that's what happens when the guys behind a sizable percentage of much of the most cherished Comic-Con iconography of the past decade and a half – Buffy the Vampire Slayer, Angel, Firefly, Lost, Cloverfield, and, almost forgot, the upcoming battle royale The Avengers – decide to try their hands at outright horror. Things get weird.

Sure, there will be blood, but there will also be conversations and probably not a few arguments. Genre and nongenre fans alike will exit the theatre wondering whose cinematic fist just hit them square in their solar geexuses. Technically, that'd be Goddard landing the body blow, as this is the longtime screenwriter's directorial debut.

One thing should probably be made clear here, and that's that Goddard sounds like anything but a pissed-off genre film fan with a grudge. For one thing, he's laughing too much. It's not so much an anger at horror that he's getting at per se as much as it is a kind of annoyance with the sloppy, unimaginative downward spiral of the American horror film over the last decade plus. Too many Saws in the knife drawer, so to speak.

"I've always asked myself the question, 'Why do these kids [in horror movies] always go out to the creepy, abandoned cabin in the woods?' Whedon, speaking separately, explains. "Why do they always seem to be getting dumber, why does the blonde go first, why do they always get separated? I love horror movies, but I'm also very interested in their patterns, and in some ways, I can get kind of cranky about the way they're changing. It seems so logical to me that what happens in [our film] is what's really happening. It's not just a critique of horror but also, I think, a look at our own creative process. You write what you know, and what I know is writers and the ways in which they decide to manipulate [their characters] and the terrible things that they do to them."

And what of the genre's most recent and – more traditionally inclined horror fans would say – laziest branch of the genre family tree, the reality-television-bred, cheaply effective scares of, say, the Paranormal Activity franchise?

"I think we're both a little more testy about the torture-porn version of horror," says Whedon. "It's that attitude of 'Oh, we get to see this guy's head split open and his eyeballs pop out, but it's OK 'cause he's kind of a dick.' And I'm, like, wait a minute – what part of that was OK? Those characters are so expendable that the audience is only identifying with the thrill of destroying them and not at all with the hope that he may somehow get away. That's not actually horror. That's a totally different kind of gratification.

"As far as the Paranormal ... movies go, those hadn't happened at the time we made this film. That's a phenomenon of the past few years, and although I haven't actually seen most of those movies, I think that's a totally valid form of horror because they're based on fear as opposed to murder. To me, they're the most classic-styled horror movies being made right now because they really rely on that old-school feeling of something is just wrong here and we're not going to give it all up to right away. And to me, the catch is that you're going to be really creeped out. That's so much better than having an even more inventive evisceration every 10 minutes."

All current genre specifics aside, the film that The Cabin in the Woods recalls most of all (if it can be said to recall any other horror film in recent memory) is, tonally at least, John Carpenter's oft-overlooked minor gem of omnipresent unease, 1994's In the Mouth of Madness.

Both films play fast and loose with the audience's presumed expectations within the boundaries of the horror genre, and both films owe a sizable debt, greater or lesser, to the cosmic, reality-distorting scenarios of 1930s pulp magazine favorite H.P. Lovecraft.

"Joss and I actually had a lengthy debate," says Goddard, "about whether or not to have [a] character ... actually say something along the lines of, you know, 'You mean this is all for Cthulhu?'...

"The truth is, we didn't want people to say 'It's just Lovecraft.' It was always important to create our own thing throughout the process and not just take other people's work and do a mash-up. It was equally important for Joss and I to try and create something totally new along the way."

In the end, what Goddard and Whedon have done with The Cabin in the Woods isn't so far off from what Lovecraft attempted in his day: Change the rules of the game, or at least inject something new and above all weird into a genre that's become, of late, too often as moribund and stale-seeming as the umpteenth Jason and Freddy death throes of decades past.

To Goddard and Whedon's credit, the Earth dies screaming. The question is, will today's paranormal torture fans scream, too?

Editor's note: This article has been amended since publication to eliminate a plot reveal.