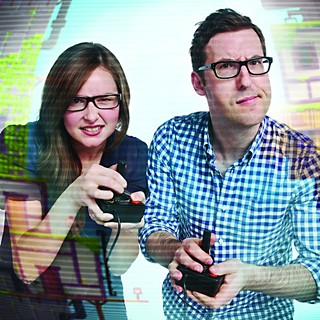 If there's one thing you learn interviewing independent video-game developers, it's how to finish a project without the promise of monetary rewards at the end. This lack of a carrot scares away many programmers and artists to established development teams (with regular paychecks) while those with games in their hearts and no fear of long nights, setbacks, and the distinct possibility for utter failure go the indie route. And it's these stories that inspire and mirror the production of James Swirsky and Lisanne Pajot's documentary Indie Game: The Movie.

The film follows Phil Fish as he struggles to complete Fez, which has been in the works for five years, as well as Team Meat (Tommy Refenes and Edmund McMillen) as they finish and release Super Meat Boy. The stress of completing and demo-ing an original game pushes all three to various psychological extremes.

"We'd wake up every morning at 8am and we'd get on the computer and work on this film until midnight. And that's what they do," says Pajot, drawing a parallel to a common practice in the gaming world known as "crunch time" (i.e., the month or so before a deadline when working nonstop is expected). For film and game indies, crunch time often coincides with a running-up of credit card debt, which only adds to the pressure to make a quality product and hopefully get out of the red soon after release.

Like any well-tested game, Indie Game: The Movie wasn't always the streamlined vision it is now. Pajot and Swirsky travelled all over (including a stop at 2010's Fantastic Arcade in Austin) and got footage from an arsenal of indies. "We tried to have all 25 voices in it," Swirsky admits, "and it ended up being this 3½-hour Ben Hur type of movie, without the Ben Hur-ness. It was just long." Luckily in this era of DVDs and digital releases, instead of these stories ending up on the cutting-room floor, they'll find a home as extra vignettes totalling the length of another feature film.

While Pajot admits, "We haven't made any money yet," it's hard to describe their premiere at the Sundance Film Festival as anything but an unmitigated success. Even before the film had been seen by the public, things were looking good for Pajot and Swirsky. How many folks get an email from Scott Rudin's people offering to option a movie's premise for a half-hour dramatic series for HBO? As Swirsky put it, "If you had to pick a dream team, it would be Scott Rudin of The Social Network, and HBO of ... just good television." Riding that high, the filmmakers then enjoyed overwhelmingly positive press at Sundance. With a panel at South by Southwest ScreenBurn, in addition to multiple festival screenings, momentum continues to build.

The one hurdle the film has yet to overcome is the transition to digital distribution that is inherent to the gaming medium. Whereas game devs can become overnight sensations with titles released directly to the App Store or just available for online download, films haven't yet found a way to transcend cult success without the help of a national distributor. That's not to say a festival film can't make a tidy profit without being on big screens around the world, but a film isn't a blockbuster without getting into the AMCs and Regal theatres of America. But even without a distributor, Swirsky and Pajot are wading through more than 3,000 requests to have Indie Game: The Movie brought to hometowns across the states and Canada, and are planning to take the movie on tour. Afterward, the film will arrive on various digital platforms for repeat viewings – and that's not a bad carrot.