And swarm they have. Just days before this writing, Anonymous released one of its increasingly frequent, should-be-patented, pseudo-Orwellian "operation statements" titled "Operation Global Blackout." It's threatening, in other words, to shut down the entire Internet just as soon as SXSW is over. (Hey, if Egypt can do it, why not the Anons?) And according to its online statement, "To protest SOPA, Wallstreet [sic], our irresponsible leaders and the beloved bankers who are starving the world for their own selfish needs out of sheer sadistic fun, On [sic] March 31, anonymous will shut the Internet down."

In the meantime, Anonymous has kept itself busy hijacking the websites of the CIA, FBI, and the Austin-based global intelligence outfit Stratfor (a hack that in retrospect is widely viewed by hacktivists inside and outside of Anonymous proper as a bit of a poor choice, seeing how Stratfor is generally regarded as a "white hat" – i.e. a good guy – insofar as global intelligence gathering companies can be considered good).

"I first heard about Anonymous when they attacked the Church of Scientology in 2008," explains Knappenberger, director of We Are Legion: The Story of the Hacktivists. "Before that, I was vaguely aware of the digital online communities where they came from. But it was their presence, their physical presence, that I just found amazing. The Internet itself seemed to call forth this worldwide protest movement that was at once bizarre, compelling, and very intriguing."

How long does he think it will be before Anonymous is designated a domestic terrorist organization?

"I can't answer that, but obviously Anonymous is certainly a transformative and disruptive group that scares the governments and corporations of the world."

Surprisingly, for a leaderless, global band of latter-day Robin Hoods such as Anonymous, Knappenberger had little difficulty locating and interviewing members, several of whom agreed to speak on camera with their full identities revealed.

"They were very willing and ready to talk to me, actually. Tons of people talked to me off the record and didn't want to go on camera for obvious reasons. Some are on camera and don't actually conceal their real-world identity, including one who has gone to prison for a year and is back home but not allowed to literally touch a computer for a period of one year. Later in the film, we have the other extreme, with interview subjects using voice distortion and so on. A sizable portion of these people, even I don't know who they are now, even though I talked to them once a week. These are people who are hunted by the FBI, still, and in all cases, when I approached it as a filmmaker, I tried to respect whatever level of privacy that specific individual asked for."

Which makes, in a backward sort of way, perfect sense: the faceless, nameless people that comprise the hacktivist entity known as Anonymous want to tell their side of the story as much as anyone else. Left to the government or the mainstream media, they're inevitably painted as either teenage "hackers on steroids" or liberty-and-freedom-threatening terrorists with presumably maniacal laughs to boot. Outside of Wired.com's recent series on the history of Anonymous, Knappenberger's documentary may be the most accurate and journalistically evenhanded reportage the group will ever see.

"One of the things that I find so new about Anonymous is that they are a combination of things that aren't, actually, new. Hacking's not new, hacktivism isn't all that new, the whole 'trickster/joker' element isn't new and in fact that goes back centuries. But when it comes to the number of people who go online, the prevalence of new communication tools such as Twitter and all that, the amount of personal information online, and the ability to spy on that personal information – when you combine all off these disparate elements, then I think you have something that is very, legitimately new in the human experience. It doesn't know any kind of geopolitical boundaries and I think that governments are trying to figure out what's going on." 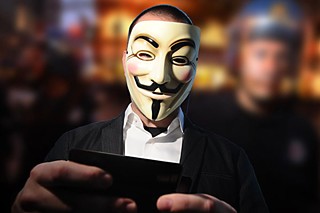 We Are Legion: The Story of the Hacktivists

Knappenberger continues: "I think WikiLeaks is a big part of this, too. It turned out to be a tool that is extremely powerful and extremely frightening to governments around the world. And the Occupy movement is also part of this continuum which revolves around freedom of speech, human rights. These tools have given people a way to mess with the powers that be. And they're doing it in massively transformative kinds of ways."

Emergent technologies, then, are the double-edged lightsaber of the not-quite-dystopian now. Just as 30,000 airborne drones were recently ordered for commercial and law enforcement use in, around, and above American cities, you can be certain that somewhere a motley band of hacktivists is already writing the code that will enable them to blind Big Brother's eyes in the sky. It is, for now, a standoff. Not between good and evil, per se, but between the morally neutral transparency of the truth and the shady opacity of traditional governance. Freedom and privacy hang in the balance as never before, and what comes next? Your guess is as good as anyone's.

We Are Legion: The Story of the Hacktivists

We Are Legion: Digital (R)Evolution

Surviving Lulz: Behind the Scenes of LulzSec

Fight Back Against Hack: Protecting Consumers

hacktivism, Wikileaks: Secrets and Lies, Patrick Forbes, Brian Knappenberger, We Are Legion: The Rise of the Hacktivists