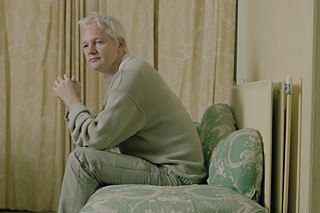 WikiLeaks. Anonymous. Occupy. Exactly when did real life slipstream over into some bizarre yet highly entertaining mash-up of V for Vendetta, Transmetropolitan, and 2000 AD's Judge Dredd? Seriously, have you seen the hypermilitarized riot gear the long truncheon of the law is wielding these days? Or the inescapable presence of the entirely incongruous – to American history, anyway – preponderance of Guy Fawkes masks both online and on the streets? It's enough, you'd think, to make V for Vendetta creator and noted reclusive curmudgeon Alan Moore rip the articulated silver rings from his fingers and summon forth Azazel to permafreeze the faux Fawkes faces to their fleshly countenances. Talk about being "anonymous."

But lo and behold, no. In a surprisingly uncharacteristic turnabout, Moore wrote last month on the BBC's Technology site: "As for the ideas tentatively proposed in that dystopian fantasy thirty years ago, I'd be lying if I didn't admit that whatever usefulness they afford modern radicalism is very satisfying. ... it feels something like V for validation."

Truly we have entered into some sort of crisis on alternate Earth(s) here. And where better to assemble the multiversed masses of geekerati and technogenii than at South by Southwest 2012? This year SXSW presents multiple panels on the virulent protestations sweeping the globe as well as two excellent documentary films for those late to the barricades. Patrick Forbes' Wikileaks: Secrets and Lies is an evenhanded examination of the patently unfunny brouhaha surrounding the intel dumpsite, creator/agent provocateur Julian Assange, and original leaker and presumed government fall guy Bradley Manning.

Brian Knappenberger's We Are Legion: The Rise of the Hacktivists is a definitive, finely calibrated documentary on what until a few years ago was more or less a semisecret noncollective born of Chris "moot" Pool's 4Chan site. (From Rickrolling, LOLcats, and creepiphilic Pedobears to shutting down the likes of PayPal, Mastercard, and Visa, moot's virtual Internet legacy may be one of the weirdest ever.) The self-dubbed Anonymous has since moved from utter mainstream obscurity to become the virtual face of rage in this era of ever-present inequality, appropriating the Fawkes visage along the way. It butted heads with the infamously litigious Church of Scientology before engaging and breaching the servers of the Tunisian government in January 2011 and officially (or as official as Anonymous gets) announcing its newfound pro-activist leanings. It's as though your kid brother (or sister – Anonymous is believed to be generally gender equal) had his fill of dick jokes and donned a stylin' black-ops hoodie and decided enough was enough – that it was time to break out the Low Orbit Ion Cannon (a hacking program) and, to quote Chuck D, "shut 'em down."

And so they have, time and again over the past two years, despite the arrests of "the Anonymous 16" in the wake of the PayPal, Mastercard, and Visa denial-of-service attacks. There are, as the Feds and Interpol surely know, far more Anons and their sympathizers out there than law enforcement has the ability to corral. As a friend of mine put it to me the other day, "If they somehow managed to uncover and bust every member of Anonymous and their sympathizers in Austin, Texas, we'd lose a third of our population overnight and Whole Foods would be a ghost town."

The big question – the $25,000 Pyramid Super Mega Jackpot Query of Total Fucking Relevance to the topic at hand – is this: Since the New Year's Eve passage of the National Defense Authorization Act, which allows for the arrest, the indefinite detention, and – although not stated in such blunt terms in the actual wording of the law – the ability to "disappear" American citizens on any number of outlandishly vague (and thoroughly unconstitutional) charges relating to the already miasmatic notion of "homeland security," how long will it be before Anonymous and similarly self-christened Robin Hood Net avengers (Lulz Security, anyone?) are officially declared to be enemies of the state or terrorist entities?

Our guess? Not half as long as it took Alan Moore to grow that beard of his.

"I think it would be appalling if WikiLeaks and similar groups were targeted as terrorist organizations," says Forbes, director of Wikileaks. "What's interesting about the WikiLeaks disclosures is that, they've been unleashed upon the world and, hey, the world's still the same place and life goes on. All the stuff that was said about how this would destroy all the temples of modern day civilization and governance ... you know what? It hasn't happened. And there is some argument that the release of the WikiLeaks files has brought about some good. Things like the Arab Spring being helped along – although not 'caused,' as Julian thinks – by all the WikiLeaks disclosures, in that case it would be impossible to argue that they were anything but good."

U.K.-based Forbes, who came to the WikiLeaks story after a series of socially-aware documentary projects, explains: "I got interested in the whole thing because I thought all the coverage was going the wrong way, in that it was very Julian Assange-centric as opposed to the source. Anyone who's ever been involved in journalism knows that the source is the key. It seemed to me that Bradley Manning's plight was being completely overlooked, so that's how I got interested first off. I felt that a lot of the coverage around Julian and the rape stuff was a complete distraction from the main issues."

As of this writing, Manning is facing a court-martial for his alleged actions in the release of a trove of military data to WikiLeaks and has been nominated for a Nobel Peace Prize by members of Iceland's Parliament. Confusing? Not really. Governments fear WikiLeaks (and by extension, Anonymous, Occupy, etc.) will expose their grimy inner cogs and mainsprings – the sometimes, if not always, bloody and duplicitous business of statecraft. The populace, on the other hand, is already aware (even if only intuitively) of shady goings-on between their leaders and those of other countries. It's hardly a surprise that Manning would be hailed as a hero in many parts of the global conversation. Either way, however, the genie is completely out of the bottle at this point.

"And you can't put that genie back into the bottle," notes Forbes. "It is impossible to do so. We are in a new era, and WikiLeaks is a symptom of that. It's not the cause of it but there is no going back now. Everybody involved has got to face up to that. Assuming that Bradley Manning did what he is alleged to have done, and that has yet to be proven, then the guy did a heroic thing for, it would seem, heroic motives. And, you know, it's really him who is symptomatic of this age. There he was sitting with this vast amount of information right there at his fingertips, he hit send, and it all went out in a nanosecond. And that's what's going to happen. Trying to say that will never happen again, or threatening Bradley Manning with life imprisonment, is just foolish. It's going to happen again and again. Any attempt to put that genie back in the bottle is doomed to failure."

In the case of Anonymous, the metaphorical genie has morphed from ethereal Internet entity into a vast number of living, breathing corporeal beings, a hive mind that has abandoned the hive in favor of the swarm.

hacktivism, Wikileaks: Secrets and Lies, Patrick Forbes, Brian Knappenberger, We Are Legion: The Rise of the Hacktivists