Art as Acts of Subversion and Immersion You certainly see uncertainty on camera in Trash Dance, Andrew Garrison's documentary about the creation of a large-scale, site-specific dance showcasing city employees who haul off refuse for a living. The workers from Austin's Solid Waste Services Department, many of whom are middle-aged and African-American, aren't sure why this young white woman wants to make a dance about what they do, much less have them perform it. Choreographer Allison Orr isn't sure which of them will buy into her vision of a performance that draws attention to the everyday movements of sanitation workers and the machines they operate and reveals the beauty in them. And in the last week before the performance, no one is sure whether the storm clouds will break long enough for the dance to take place or if anyone will come see it if it does.

It turns out there was uncertainty behind the camera as well. Garrison started filming without really knowing Orr, her Forklift Danceworks company, or how she works, except that she makes dances with nontraditional performers and that The Trash Project, as she called it, would be focusing on sanitation workers. "I didn't know Allison. I didn't know what kind of person she was, how she would be received, how she would treat people," he says. "There were moments when it was, 'well, this is all OK, but is this gonna turn into anything? I don't know.'"

It turned into something, all right: a phenomenon. The weather did cooperate long enough for the one-shot performance to take place in September 2009, and more than 2,000 people stormed the abandoned runway where Austin's Mueller Airport once stood to watch. Their response as the two dozen city workers and 16 trucks created unexpectedly lyrical movements on the rain-slicked tarmac had the electric enthusiasm of a rock concert. That night, Garrison knew that the film would come together. But he had become sure of his subject months earlier, on the day he was filming Orr in the recycling center and she walked up to a city employee and began speaking to him in Spanish. He was knocked out by the way she remembered him, remembered his family, remembered his cultural background, and was very comfortable relating to him in that way. "Neither of them had to speak Spanish, you know, but it was great, because it was so obvious the way that she was able to connect with people," says Garrison. "That's when I knew that there would be something here, and it wouldn't be this situation where somebody who is disconnected has an idea and then tries to make everybody do that idea. It was all about the way that she gets people to own it and be a part of it and bring what they've got to it."

In his film, Garrison tracks Orr getting to know the people who perform this essential service and doing it inside their world: going on 6am trash and recycling routes, riding to the landfill, joining the overnight crew at 2:30am on New Year's Day to clean Sixth Street, even picking up dead animals. She was answering a question for herself – Who are the people who pick up my trash? – but she says she also wanted "to make a dance that offered a more fully human picture of the people who work as 'trash men,' and I wanted the audience and the performing employees to feel more connected to each other once the performance was over."

At that, Orr succeeded, says Garrison. "The performance changed relationships between people, both at work and between whoever the customers are and the people actually doing it." He saw it as audience members rushed to meet The Trash Project's performers, shaking their hands, getting their picture taken with them, thanking them not just for the show but the work they do daily. And he's seen them now greet the waste department employees as they do their jobs. Garrison believes that a transformational quality is embedded in his film. "I want people to see it because of that ability that it has to make you see the work differently and meet those people," he says. And that's not restricted to Austinites, either. "This is not a unique situation. Across our country, people are doing work that needs to be done, that's thought of as the lowest-of-the-low work, and we treat them as if they're invisible. We don't look in that direction. And I'd like other people to look in that direction." – Robert Faires 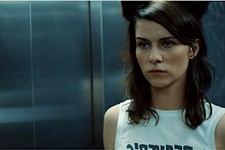