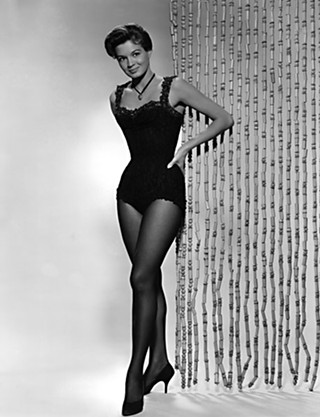 The Texas Film Hall of Fame Awards has historically been held at Austin Studios, but that space is currently converted into a facsimile high school for the production of ABC Family's The Lying Game. But high school, with its celebratory pomp and its easily identifiable types (the popular blonde, the hood with a heart of gold), isn't a bad metaphor for the eclectic mix of honorees at this year's ceremony, which has moved to ACL Live at the Moody Theater. That gold-hearted hood, natch, is Danny Trejo, who will accept the Patrón Honorary Texan Award on March 8. (See our interview with Trejo, "No. 1 Troublemaker.") Certainly you'd be hard-pressed to find a prettier – or leggier – blonde than the still-luminous Angie Dickinson, who will accept the Star of Texas Award for Rio Bravo. (The Chron chatted with Dickinson last spring on the subject of that very same Howard Hawks classic Western; see "'Rio Bravo' a Stop on the Road to Hollywood," April 15, 2011.) To continue the speculative thread, we're guessing filmmaker Douglas McGrath was Honors English all the way, laying the groundwork for his award-winning adaptations of novels by Jane Austen and Charles Dickens (he also co-wrote the Oscar-nominated script for Bullets Over Broadway with Woody Allen). As for Meat Loaf, no way was that guy not a drama club kid, not with The Rocky Horror Picture Show on his CV. (He also starred in 1980's Roadie, which was co-written by the Chronicle's own Michael Ventura; see "One, Two, Tres, Quatro," for more Roadie recollections.) Final honoree Barry Corbin is tougher to shoehorn into a teen stereotype – is it even possible that perfectly growly, jowly character actor par excellence was ever, egads, young? He must have been – his filmography stretches back 40 years, including a stint on the much-loved Nineties show Northern Exposure – but he's more the principal type. Even when broadly smiling – and in our mind's eye, he's always smiling – Corbin radiates a don't-fuck-with-me authority. They'll all be in attendance at the Texas film community's swankiest pep rally of the year, and you can be, too; individual tickets are still available for purchase at www.austinfilm.org. Finally, a seat at the cool kids' table.