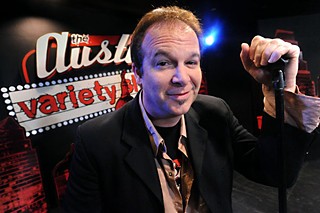 You can call Troy Dillinger a lot of things – boisterous, headstrong, generous, selfish, talented, bawdy, crude, disciplined, scatterbrained, adolescent, libidinous, self-involved, self-obsessed, self-destructive, funny – as long as you realize that Troy Dillinger has beaten you to it.

Dillinger, the creator and host of The Austin Variety Show, loves to talk about himself – unapologetically and devotedly and with a practiced ironic grandiosity to keep you from taking him too seriously. He's one of his favorite subjects. The only thing he likes to talk about more is Austin.

Dillinger adores Austin. Like Woody Allen's Isaac Davis in Manhattan, he romanticizes the city he lives in all out of proportion; he's convinced Austin is the place everyone in the country is talking about, or should be.

Which is a good thing. Because Dillinger is busy trying to sell national TV producers, agents, studios, and networks on the Variety Show, which is about Austin, based in Austin, and features entertainers from Austin. If Dillinger doesn't believe Austin is the place everyone is curious about, he won't be able to convince them that it is. And if he can't do that, they're not going to give him their money.

To help his cause, Dillinger has put together three minutes of show highlights called a "sizzle reel." Last week at a meeting of the Variety Show production staff (all of whom, except for Dillinger, work for free), Dillinger summarized nicely the aim and appeal of the Variety Show while describing the basic outline of the sizzle reel to his editor, Cassandra McManus: "First we say, 'We're from Austin and what we're doing is ridiculous.' Then I say, 'I'm the host, Troy Dillinger, and I'm an asshole, and I have no business doing this show.' And then there's all these clips of me being a dick. I call that section, 'Who's Troy?'

"And we close by saying Austin is great."

The Austin Variety Show is Dillinger's scatological love letter to the city he says saved him – from failure, from poverty, from himself. And since Dillinger writes The Austin Variety Show, hosts it, stars in it, co-edits it, casts it, and markets it, it's also a celebration of all things Dillinger, not just his tastes but his faults and his failures, as well. All of which he's happy to talk about.

When he was a young man in the Eighties, Dillinger played in local punk bands, several of which, he says, got to the cusp of fame and stardom before misbehavior sabotaged their opportunities. In the early Nineties, the modest success Dillinger had with Del Dragons turned him, by his own admission, into an insufferable jerk who flaunted his small fame and celebrated his cultural significance at the expense of those around him.

"I thought I deserved to be the biggest rock star in the world. I felt entitled," says Dillinger. "Plus, I was on my way to a really nasty alcoholic bottom. I just kept self-destructing. It got to the point where I would go off on waitresses and bartenders who were just doing their job. I was just not cool to people."

Dillinger bottomed out in 2002, when a tour-van accident left him physically and emotionally battered. His mood darkened as his prospects receded. Very little money was coming in. For a while, he lived on the streets. Later that year, Dillinger was hospitalized with a case of viral pneumonia. He was released on Christmas Day. The whole year of 2003, he says, was terrible from beginning to end.

In 2004, however, a chance recording session with a friend led to the Troy Dillinger Dirty & Hairy Film Festival, a collection of short movies from local film directors shot to accompany the 11 songs Dillinger had recorded. "That was the culmination of everything I was doing at the time," he says, "and it was just successful enough that my head kind of came up above the water a little bit."

The next years saw Dillinger evolve into something of an Austin impresario. He started Austin Swim, which, during its three-year run, was the only officially licensed viewing party in the country for Comedy Central's Adult Swim programming block. Every week, Dillinger would set up a giant screen at a Downtown bar; invite different bands, comedians, and burlesque dancers to perform; and host a game show. "We even had an inflatable 15-foot swimming pool to go with the theme of the evening," he says. "So people would get loaded and jump in the swimming pool. It was pandemonium. It was a great time."

Still, Dillinger says, something was missing. It had taken him five years to climb out of the emotional low he'd reached in 2003, but, he says, "I started realizing that I wouldn't get anywhere until I started to set stuff right. So I looked at my relationship with music and with Austin, and I started realizing that I'd expected everyone to hand me more than I was giving them. And then when I was given it, I would give less. I needed to do something to make it up to the Austin music community."

In 2008, Dillinger's relationship with the executives at Adult Swim was souring, and he decided to shut Austin Swim down. Late that year he started Save Austin Music, which was a support group for the Austin music scene as it struggled to adapt to the new Downtown reality of expensive condominiums and more restrictive sound ordinances as well as a sort of political action committee meant to promote policies that would benefit musicians, clubs, and other stakeholders. These days, Dillinger talks about his decision to start Save Austin Music with an almost religious enthusiasm.

"One day, I got this grand vision, and the whole thing came together. It was like I'd been charged with a duty," he says. "The vision was so clear, I had to do it. So I started putting one foot in front of the other. It was amazing: As I put my foot out, the ground would appear beneath me. It ended up being the voice of the community at a very vital time."

Even though Save Austin Music didn't accomplish everything Dillinger had hoped it would, "I felt like I got to get right with the music community that gave me a career," he says.

Things were looking up. As Save Austin Music was reaching its end, a promoter approached Dillinger about starting up Austin Swim again. But since his first experience with the show had ended on a sour note, complete with intimations of copyright thievery, he passed. Instead he decided to take the basic format – the live emcee, the licentious game shows, the local performers – and simply drop the affiliation with Adult Swim. The Austin Variety Show was born.

Can the Bands Play On?
The Live Music Task Force tunes up to protect Austin's claim to fame 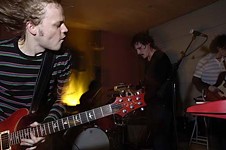