The Many Lives of an Incorporeal Icon

A new 'Beetlejuice' sequel may be in development, but Warren Skaaren already pondered 'Beetlejuice in Love' two decades ago 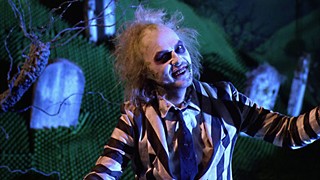 Internet rumor has it that in the wake of Tim Burton's 3-D IMAX remake of Frankenweenie, Warner Bros. will also resurrect Beetlejuice, the 1988 horror-comedy that pulled off the neat trick of being mainstream but still edgy, commercially successful yet critically acclaimed. No official announcement has been made, but it's common knowledge in blog land: Pride and Prejudice and Zombies author Seth Grahame-Smith is working on a Beetlejuice 2 screenplay, with Michael Keaton in talks to reprise his role as the unsavory "bio-exorcist" and Burton circling to direct.

The BJ2 buzz has grown steadily since last summer, and fan sentiment seems to have morphed from dread to morbid curiosity, even intrigue. (At the very least, the comeback of Keaton's coked-up ghoul will be a welcome respite from the encroaching jowls of Burton's regular leading man, Johnny Depp.) What most people don't know, however, is that this is not the first sequel attempt. In 1989, the Geffen Company commissioned two follow-up screenplays: one by Mars Attacks! writer Jonathan Gems (described by Burton as "an updating of 'House of Usher' set in Burbank" and incongruously titled Beetlejuice Goes Hawaiian) and another by Austin's own Warren Skaaren, called Beetlejuice in Love. The latter manuscript is in the archives of the Harry Ransom Center.

In her book Chainsaws, Slackers and Spy Kids: 30 Years of Filmmaking in Austin, Texas, Alison Macor describes writer-director Skaaren as a Zelig of the local scene. Skaaren, who died in 1990 at the age of 44, served as the first executive director of the Texas Film Commission, had a hand in The Texas Chain Saw Massacre, and ran a production company in Dallas. He also associate-produced Top Gun and script-doctored several films, including Beetlejuice, for which he shares a writing credit with Michael McDowell. Macor, who is now working on a biography of Skaaren, points out that he was one of the first people to demonstrate the possibility of working in Hollywood without leaving Austin.

I spent a delightful rainy afternoon looking at Skaaren's papers pertaining to Beetlejuice and the unfinished sequel at the HRC. There are storyboards and stills of sandworm models; snapshots of Burton hanging out at Camp Mabry; documents related to Beetlejuice: El Super Fantasma, the Spanish-language version; and a lurid fan letter from a housewife concerning the animated Beetlejuice character in ABC's spin-off cartoon.

The draft of Beetlejuice in Love has a Phantom of the Opera-type plot, perhaps inspired by Andrew Lloyd Webber's blockbuster musical, which opened on Broadway in 1988. Beneath this and other topical folderol (jokes about Lionel Richie, synthesizers, Fiesta Ware), Skaaren's vision of the underworld is impressively fresh. He scraps the retro-DMV style of the original in favor of something more disturbing: purgatory as a New Age, California-casual-corporate nightmare. The dead are forced to sing in charity-single supergroups and attend anger-management classes. It's like a mandatory team-building retreat that never ends. There's a poignance to the humor, particularly knowing that this was one of Skaaren's last projects. He was diagnosed with cancer weeks after completing his first draft in 1990, and he died in December of the same year.

Writing BJ2 20 years later, Grahame-Smith has a tough task on his hands, and Skaaren could probably teach him a thing or two. Fortunately, archives make it possible to pass messages from beyond the grave. So in case anybody's listening, here's an instruction Warren Skaaren might give: Purgatory should be so tediously shitty it's life affirming.