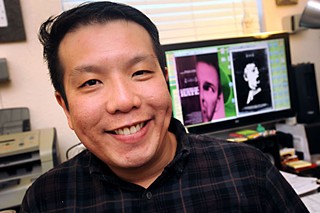 A self-taught graphic designer, Yen Tan has conceptualized poster art for a raft of local and international filmmakers. (Photo by John Anderson)

In the end, a movie poster is just an advertisement – no different from a roadside billboard for an amusement park or a brand of soup.

Still, only a true cynic would argue that there haven't been posters during the 100-plus-year history of cinema that were so iconic that they transcended the marketplace of the moment and became permanent parts of the culture. Think of Saul Bass, whose posters for Anatomy of a Murder, The Man With the Golden Arm, and Vertigo reduced cinematic grandeur (and the human body) to simple geometric shapes and primary color schemes. Or think of the poster for The Exorcist with its beam of light pouring out of that possessed house like a tractor beam. Or the posters for the Indiana Jones series which managed to distill the essence of adventure into a frozen curtain call of nostalgia.

When Yen Tan was growing up in the Eighties, he didn't dream of making movie posters; he dreamed of making movies like the big American blockbusters that flooded the movie theatres of his native Kuala Lumpur, Malaysia. His parents, meanwhile, dreamed of their son having a viable career. And though Yen Tan's parents won the battle, you could argue Yen Tan won the war. They sent him to Drake University in far-off Des Moines, Iowa, to study advertising, but he attended film classes on the side and learned that there was a whole world of movies that didn't require $50 million to make – a dangerous realization for any aspiring filmmaker who had until that point been deterred from his desire by family obligation.

"In my film theory classes, watching French New Wave films and all this foreign cinema, I realized there's this other spectrum of filmmaking that seemed more reachable than big Hollywood movies because they seemed like they were more rough around the edges," Tan says. "The way they were made had a quality that was lacking in a lot of conventional, mainstream Hollywood movies, which was the element of introspection and the sense of always trying to explore the human condition. That felt right for me. And I realized that's what I wanted to do."

After college, Tan moved to Dallas, where he shot his first movie, the short "Love Stories," in 2001, during the three weeks' vacation time he got each year from his paying job as a copywriter for Neiman Marcus. Over the course of the next 10 years, Tan shot six more films and became something of a name in the world of gay independent cinema. His first feature, 2002's Happy Birthday, won the Jury Prize for Best Feature at the Philadelphia Gay & Lesbian International Film Festival; his most recent, Ciao, won a jury award at the AFI International Film Festival in Dallas and screened at the Venice Film Festival in 2008. All the while, Tan worked his paying job as a copywriter for Neiman Marcus, though fate, circumstance, and necessity would soon conspire to change that.

When films go to film festivals, they don't go alone, not if the filmmakers don't want them to die slow deaths once they get there. Movies need to be promoted, especially at festivals, where there are a thousand and one other movies competing for the same sets of eyes. But movies like Tan's are shot on tiny budgets, and rarely is there enough money around after the film is made to pay for promotion. So from very early on in his film career, Tan started designing his own posters because there was no one else around to do it.

"When my films got into festivals and I needed artwork designed, I did it myself because I had to," Tan says. "I learned how to do it over time, completely self-taught. I didn't go to design school. I didn't become a graphic designer in the way most people did. So my approach to it was always as a filmmaker. It's very intuitive."

Tan's posters were good, and eventually his fellow indie filmmakers, equally low on funds, were calling on him to help them design posters for their own movies. Before he knew it, Tan had fallen into a side career as a graphic designer, creating posters for some of the biggest names in the small pond of Texas independent film, including Bryan Poyser (Lovers of Hate) and Heather Courtney (Where Soldiers Come From). Tan's posters, with their simple yet daring imagery and their minimalist design, seem to capture the conflicted artist's desire to both create something beautiful and to sell it.

"There's a sparseness, a great sense of negative space [to Tan's designs], something very classical – and classy – about his work that I really admire," says director Clay Liford. "His influences aren't other films. His work really dabbles in the fine art territory."

Liford hired Tan in 2011 to design the poster for his award-winning black comedy Wuss, about a high school teacher seeking revenge against the students who attacked him. Liford's original concept for the poster was just a picture of the lead actor's face marked by blood and bruises – "the usual BS," he says. But Tan came up with the idea of sticking that same face on a chicken, a concept, Liford says, that not only enhanced the aesthetic value and metaphorical meaning of the poster but gave Liford and his producers an iconic image to sell the film with.

"People remember his images. The chicken-body character for Wuss is really iconic. It looks amazing on a button. We put it on there without even the title of the film. It was so iconic, it was all we needed," says Liford. "Yen is branding your film with a certain iconography. He goes in there; he actually watches your movie. And he picks an image. Maybe it's not even an image that occurs in the film, but it's an idea, an interpretation, something that tonally represents what he feels is the heart of the film."

Director Jason Cortlund, who was in the Netherlands last week for the premiere of his and Julia Halperin's Now, Forager at the Rotterdam International Film Festival, thinks that Tan's experience as an independent filmmaker has given him a personal understanding of the huge role posters can play in the life of a small movie struggling for attention.

"He understands the sometimes precarious business side of making a nonindustrial product that still needs to find an audience at the end of the day," says Cortlund. "Poster art is kind of the first gestalt experience someone has with a film – so it's really important that it captures the essence of your story. It's maybe unusual to have a poster designer who's also an established filmmaker in his own right, but I think it's a huge advantage to his creative process."

Tan is now a full-time graphic designer living in Austin. In 2010, he started his own design company, Otto Is the One ("otto" being Italian for "eight," eight being a propitious number in China because it sounds like the Mandarin word for prosperity; "That's what it means: The number eight is the one," says Tan). In addition to the posters and buttons and press packets he makes for films, he also designs layouts and labels for magazines, catalogs, and salons, not to mention a boutique in Hong Kong.

But Tan is still making movies as well – the script for his next feature, Pit Stop, was accepted into the 2009 Outfest Screenwriting Lab, where it was whipped into fighting shape by Hollywood writers like Guinevere Turner (American Psycho) and Brian Dannelly (Saved!). Tan says he hopes to start shooting in Texas in May. But, as with all his films, his goals for Pit Stop, monetarily anyway, are modest.

"Now that I've made movies myself, I don't think I'll be able to make $15 [million] to $20 million movies like the ones I loved growing up; it seems so unreachable," says Tan, who hopes to gather together a few hundred thousand dollars to make Pit Stop. "I don't want the burden of making a $20 million movie because I think it could break you as a person. Well, maybe it would just break me. I don't feel like I'm at a point where I could tackle that."

So Yen Tan will keep making his posters so he can keep making his modestly scaled movies. And thus the great balancing act between art and commerce, between creativity and profitability, between Yen Tan and Yen Tan's parents, goes on. 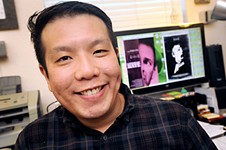