Crowdfund for the Win

So you've decided to make a movie, like Yen Tan. You've got your script written and your actors cast and your locations picked out. You have producers and editors and cinematographers and dolly grips and best boys all lined up and ready to work. Now all you need is money.

Traditionally what you would do at this point is one of three things: 1) ask your parents for a loan, 2) apply for a grant from a group like the Austin Film Society, or 3) get funding from a major Hollywood studio. Or you could step off the traditional path, jump online, and do some crowdfunding.

These days, it seems like everyone in the world of independent filmmaking is using online crowdfunding campaigns to raise at least part of their budgets for upcoming projects. Tan, for example, secured $29,000 to help get his next feature, Pit Stop, into production – one small donation at a time. In fact, the crowdfunding phenomenon has gotten so big that Now, Forager co-director Jason Cortlund believes a "crowdfunding malaise" has started to hit the indie film community. "It sometimes feels like we're just trading the same $20 back and forth," he says.

So, to combat that malaise and to ensure that funds keep coming in, you will have to get creative with your campaigns and expand your field of potential contributors. Cortlund and his co-director, Julia Halperin, for example, asked for help from people outside the movie world whom they figured would have a particular interest in their story about wild-mushroom foragers – mycology groups, wild food enthusiasts, and "some very top chefs around the world."

"When artists successfully expand their circle to other communities, then great, great things can happen, not only in terms of cash support, but also in terms of audience development, presales, and general marketing," says Cortlund. Their efforts resulted in more than $18,000 coming through two crowdfunding websites: Kickstarter and USA Projects.

In addition to expanding your potential donor pool, it's also important to keep changing up the kinds of rewards you offer those generous enough to give. Clay Liford, for example, went the "goalpost" route with his crowdfunding campaign for Wuss (total take: $8,000). With every fundraising goalpost the campaign reached, contributors got to see another clip from the film. "Something to keep people returning to the site," Liford says.

Of course, it also helps to have the best, most creative, actual, tangible gifts to give in return for money donated. For example, people who pledged $25 or more to Wuss got a free MP3 download of a song from the official soundtrack. A thousand dollars, meanwhile, got them an official prop used in filming.

In the end, though, the best gift Liford offered may have been the one contributors got for a mere $50: an official Wuss movie poster, designed by none other than Yen Tan. 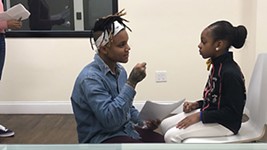