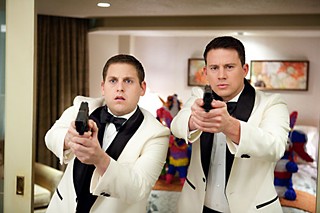 The South by Southwest Film Festival announced Wednesday its 130-film feature lineup for the 2012 festival, including Centerpiece Film 21 Jump Street. The high-profile selection of a reboot of a late Eighties cop show that first made a name for Johnny Depp might seem like a head-scratcher; Film Conference and Festival Producer Janet Pierson admits she's never seen the original show and that she approached the update, which was cowritten by and stars newly minted Oscar nominee Jonah Hill, with "total skepticism." But, Pierson says, "Jonah Hill is somebody whose career is interesting. I think he's done a lot of good work; he's growing up onscreen. He loves SXSW. And we were all surprised – there were five of us watching the film – at how funny it was and how interested it was about the changing times. It's a real social commentary."

After a fruitful three-year collaboration with Fantastic Fest, SXSW has decided this year to program its entire midnight movies sidebar in-house under the direction of Jarod Neece (the Midnight program as well as the short film slate will be announced on Feb. 8). Another 2012 shake-up? The elimination of a Texas-specific sidebar. "The rationale was that it didn't seem to be serving the Texas filmmakers," Pierson says. "There is sometimes a perception with [regional-specific programs] in a festival that it's like you're doing favors for the home team, and they're not necessarily given their due."

Texas filmmakers still have seats at the table, with the world premieres of Bob Byington's Somebody Up There Likes Me (starring Nick Offerman and Kevin Corrigan) and the Duplass Brothers' latest comedy, The Do-Deca-Pentathalon, in the Narrative Spotlight category. Jonny Mars' America's Parking Lot, about Dallas Cowboys fans' last season at Texas Stadium, and Andrew Garrison's Trash Dance, about Austin's Forklift Danceworks' unique production, will debut in the Documentary Spotlight. University of Texas alum Yaké Smith will screen his dramatic feature Wolf in the Emerging Visions sidebar, local darlings the Zellner Bros. bring Kid-Thing home after festival berths at Sundance and Berlin, and Richard Linklater will screen Bernie (starring Jack Black and Shirley MacLaine) in the Special Events section.

SXSW Film Conference and Festival runs March 9-17. For the full lineup and an extended interview with Janet Pierson, see the Picture in Picture blog at austinchronicle.com/pip.