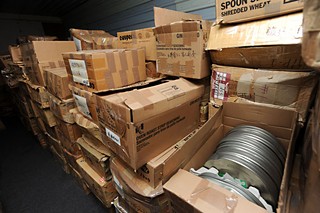 It looks like an ossuary in here, minus the bones. Instead, moldering cardboard boxes – chest high, a dozen deep, water damaged, and thoroughly dusted with the detritus of trans-Pacific travel – line the corrugated aluminum walls of an unnamed, unremarkable storage facility in North Austin.

This is in fact not a graveyard, as such, but more of a rebirth in process, the vast haul of a cinematic rescue mission undertaken by the Alamo Drafthouse and its affiliated American Genre Film Archive. Inside each of these boxes – hundreds of them – are six to 10 reels of 35mm motion-picture film, many unknown or unheard of outside the land of their origin, China. And if it hadn't been for the Alamo's collective collector's spirit, the entire lot would be sitting on the ocean floor somewhere off the coast of California.

"We heard about a film depot in San Francisco from our friends at the New York Asian Film Festival," explains Alamo programmer/AGFA adviser Lars Nilsen. "This specific depot was used by a number of now-defunct distributors who at one time used it to store all of their North American Chinese prints. But because there's no longer any market for commercial Hong Kong films on 35mm, the least expensive way to dispose of these films would have been to put them on a barge, take them out to the middle of the Pacific, and dump them overboard. They just don't have any value anymore, except to people like us."

For now, most of these sprockety treasures remain in their rat-gnawed boxes; it's going to take a lot of time, effort, and allergy meds to identify, examine, and catalog everything here. But in the meantime, the Alamo's monthly Asian Invasion series of new discoveries and rare finds culled from this extraordinary salvage expedition, continues to thrill HK cinema fans and newcomers alike. Next up is the rarely seen 1981 epic Dreadnaught from Fantastic Fest Lifetime Achievement Awardee Yuen Woo-ping. Yes, we know it's rare, but is it great?

"It's not just great," deadpans Nilsen. "It's a fucking masterpiece of world cinema. It really is. It's not like a Bergman film, OK, it doesn't have the high seriousness of that, but it's a film by people who lived and worked within a specific artistic tradition. Everyone in this film grew up in the Chinese Opera and learned, as children, how to do horrible acrobatic things that you should never force children to do and had their very minds molded into that very, very old tradition. They then carried that tradition on into filmmaking, and by the time Dreadnaught was made, Yuen Woo-ping was simply a master, any way you want to look at it. And it's just a masterful movie all the way around." 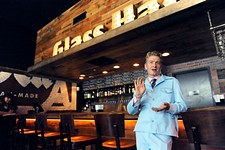