Two for One Times Three 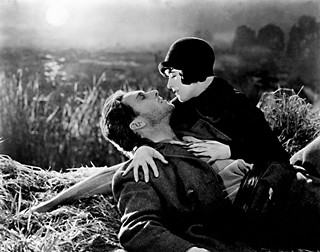 Sunrise: A Song of Two Humans

January is traditionally the time to reflect on what came before and what's soon to come, so thematically the first Austin Film Society Essential Cinema series of the new year is right on the money, showcasing émigré directors with two films each, one plucked from their Old World oeuvre and one from the New.

In his native Germany, Fritz Lang established his reputation with the likes of Metropolis and the Dr. Mabuse films. M was his first sound picture – and, oh, what a Pavlovian shudder those first few bars from Peer Gynt make. Eighty years later, M remains a deeply chilling movie, as much for its portrait of a pitchfork-wielding mob as Peter Lorre's baby-faced murderer. After Lang fled Berlin – according to the director, he scrambled out of town on a midnight train the same day Goebbels offered him the job as head honcho at UFA, Germany's premier film studio – he eventually landed in Hollywood. There he made, among others, Fury with Spencer Tracy playing an innocent man nearly lynched by his community and thirsty for revenge. The film's working title? Mob Rule. Judging by both the German and the American films, Lang didn't hold much faith in any fundamental goodness of mankind. But mankind wasn't too taken with him, either: In his book Who the Devil Made It, filmmaker and film historian Peter Bogdanovich recalled, "Not many people I met had a nice word to say" about him.

Lang's contemporary, F.W. Murnau, was another leading figure in the Weimar-era German Expressionism movement, both a master of silent cinema and a genre forefather with his proto-horror films Nosferatu and Faust. But his transition to Hollywood wasn't entirely happy; his first film, the aching, poetic Sunrise: A Song of Two Humans, won a special Oscar for "Best Picture, Unique and Artistic Production," but financially, it was a nonstarter and soured his relationship with Fox studio. Murnau only made a handful of American movies (including the documentarylike – or documentary-lite – Tabu: A Story of the South Seas) before his tragic early death at the age of 42. Lang gave the eulogy at his funeral.

From a career that spanned 70 years and multiple countries, the best bits from Luis Buñuel's very likable memoir My Last Sigh were his paeans to drinking and smoking, the pursuits of which the aging filmmaker plainly made priority: "If the devil were to offer me a resurgence of what is commonly called virility, I'd decline. 'Just keep my liver and lungs in good working order,' I'd reply, 'so I can go on drinking and smoking.'" Still, Buñuel also had some pretty engrossing recollections to share about his childhood in Spain; his early partnership with Salvador Dalí; his revivifying stretch in Mexico, where he made his acclaimed film Los Olvidados, about children living in extreme poverty; and his Sixties and Seventies steady climb into the pantheon with French-made films such as Belle de Jour, The Discreet Charm of the Bourgeoisie, and final film That Obscure Object of Desire. When the latter film's leading lady, Maria Schneider, dropped out shortly after production started, Buñuel replaced her not with one but two other actresses who trade off the same part of a sex-withholding seductress throughout the film. It was an ingenious fix, suitably surreal for a filmmaker whose own name has morphed into an adjective, Buñuelian, to denote that very special brand of disorientation.